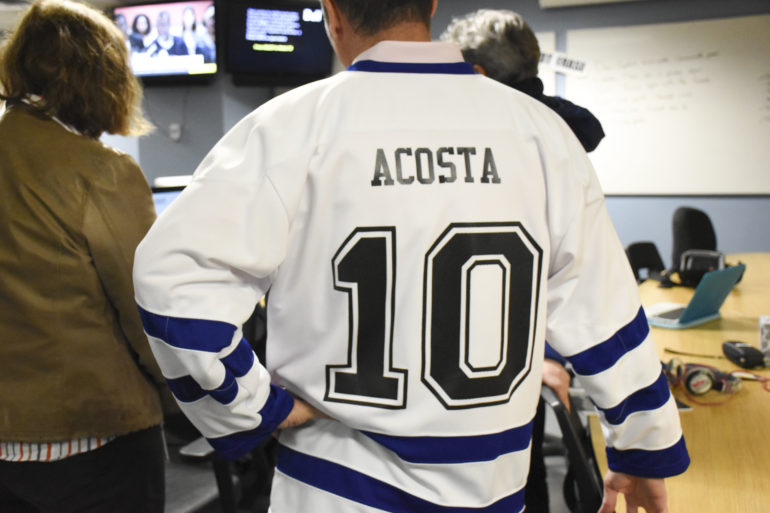 The first funeral for a victim of the Humboldt Broncos’ fatal bus crash was held on Thursday at the Elgar Petersen Arena where the Broncos played their home games in the Saskatchewan Junior Hockey League.

Bieber worked at Humboldt’s local radio station and travelled with the team for the game.

This was his first season as play-by-play announcer for the Broncos games.

Last Friday, a total 15 people were confirmed dead in the crash involving a semi-truck and the team bus.

A 24-year-old athletic therapist,Dayna Brons, became the 16th victims of the crash on Wednesday.

She was the lone woman aboard the Humboldt Broncos’ team, and died in hospital after she suffered serious head trauma.

After the deadly bus accident, Toronto Mayor John Tory proclaimed April 12 as “Jersey Day” to encourage people to wear hockey jerseys or green and gold  for those victims.

In support of the families of the Humboldt Broncos, I’m encouraging everyone in Toronto to wear a hockey jersey or green & gold today to show their support & pay tribute to the memory of those lost in last week’s tragic bus crash. #JerseysForHumboldt #JerseyDay #humboldtstrong pic.twitter.com/tYQ6tYbHth

“We are all heartbroken by this tragedy. This is a small but important way for everyone, including City of Toronto staff, to demonstrate their support for all those who have been affected,” said Tory in a statement.

We support you @HumboldtBroncos and all affected by this tragedy! Our mayor @JohnTory and members of the @TorontoPolice are with you on #jerseyday #PutYourSticksOut ??? pic.twitter.com/PyoPDaBi6p

It is #JerseyDay in the Ontario Legislature. Every single MPP from all three parties is commemorating the #HumboldtBroncos by sporting a hockey sweater. #onpoli pic.twitter.com/2x8Z8hVcEf

Acosta said “Jersey Day” is a way to show solidarity with the families, the parents, and the whole community.

“I think the whole nation is in sorrow for what happened and just want to make a gesture of solidarity with them,” he said.

“My hope is to raise awareness also and of this type of thing shouldn’t happen. Safety is a problem and I think if we make people more aware of these, people would be perhaps driving safer. It’s a really unfortunate thing that happened and it’s more than anything, a symbol of solidarity with the families.”

Luba Jaber, a Humber employee, was wearing a green jersey.

“I also love hockey and I want to support the Toronto Maple Leafs so I think today being the first day of their playoffs, it will be a nice day to commemorate the loss of lives and we all as Canadians would like to support the families and people who are effect by this terrible tragedy.”

She said she hoped people will realize that Canadians want to help each other.

“We want to make sure that we are all there as a family for people when they’re going through terrible times, and just love the fact that we all love hockey,” she said.

“We’re all Canadians, and even those who come from all over the world, wherever they come from, they still like to support Canada and our hockey team, and when something happened that’s tragic as this, I think people like to come out and support it.”