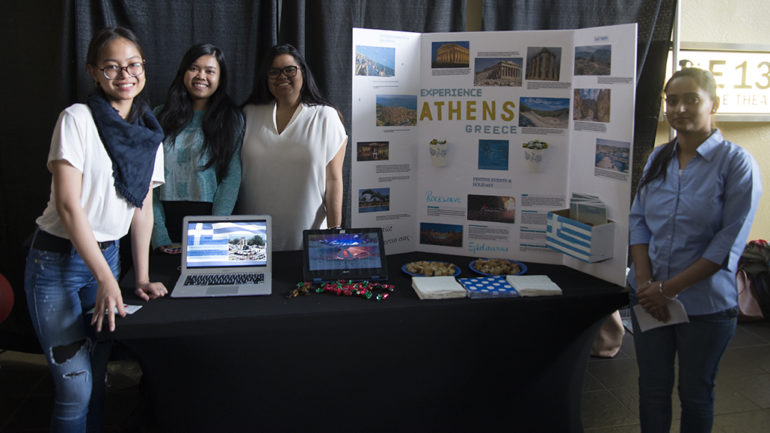 The Travel Trade show was a one-stop fair held at the E Concourse that promoted European destinations.

Students presented the Unique Selling Propositions for locales like Monte Carlo, Munich, the Amalfi Coast, Helsinki and Budapest to the visitors in the fair. Each destination had a table to itself – decorated with special things associated with each place.

Visitors toured the display tables with a “passport” and collected stamps from each of the destinations they checked. The passports were then used for a lucky draw.

Tourism Management program co-ordinator Irene Kairys was all smiles at the unexpected turnout for the Travel Trade Show. (Rucha Devarchetti)

“Primarily we want to give students the opportunity of some real-world experiences of what happens in the industry,” said Irene Kairys, program coordinator of the tourism management course. “So when they go for an internship or apply for a job they can say they have experience of talking to people, marketing and selling a destination.”

One of the most interesting attractions was a live grey parrot perched on the Canary Island table. Visitors could grab tidbits like cream rolls, cookies and other delicacies native to the destinations in the show. They were also lured by games set up by the groups.

The most popular table was dedicated to Paris. Students in this group dressed up in berets, served croissants along with red wine and had decorated the table with signboards in the signature Parisian style.

First-year students had about six weeks of preparation time for the showcase. They had to look after every aspect of execution, from conception and research to brochure printing. And they kept almost all of their creativity a secret from their professors.

“I got a surprise when I came down here today,” said Liz Stevenson, professor of travel services management. “I knew there was going to be a live bird because the students asked permission beforehand.

“Other than that, I had no idea about what they were planning to do,” she said.

She said one of the most memorable setups she had seen in the previous fairs was when a group of students recreated a destination on their table. They used maps to scale and Stevenson said it was both creative and interactive.

Throughout the event, professors and administrative staff were given the task of being secret Mystery Markers. They moved around the fair and evaluated students for their work. The stamps handed out to the visitors will also being used to keep track of visitors to the tables and give marks.

“It’s such a fantastic thing to explore so many destinations at once,” said Esther Henway, a visitor and travel fanatic. “I think this is a great place for anyone who wants a quick break from studies. And the food is super yummy,” she said.

Tourism management students are planning another show on a smaller scale for the first week of July.