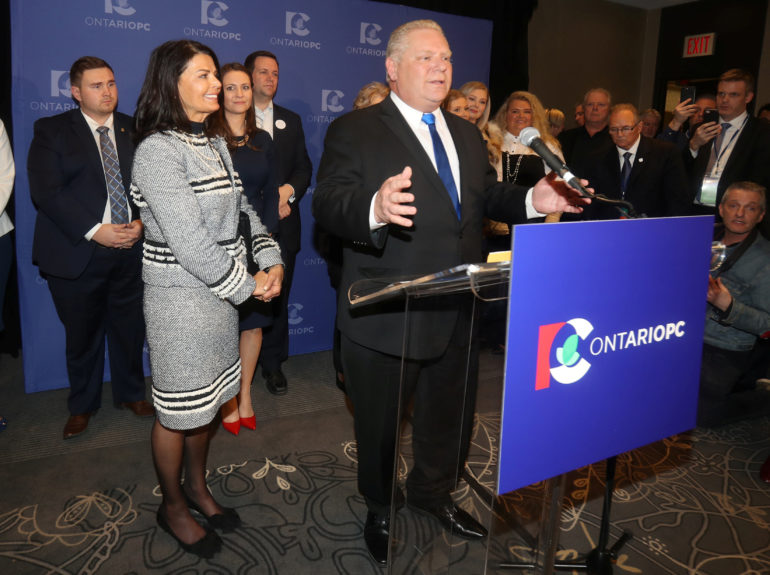 The leader of the Ontario Progressive Conservatives said if elected premier this June, he would repeal the curriculum they deem to be controversial and then review it.

“This curriculum basically updated the health and physical curriculum of which sex education was apart of and it was more than 15 years out of date,” Wynne said. “It needed to be updated.

“At the core of the health and physical education is the safety of kids,” she said. “Kids understanding what they need to know given the way the world has changed.”

Wynne said the previous curriculum was put in place in 1997 and 1998 when there was no social media and not every child was walking around with a phone.

“They did not have access to the same degree of information that they do now,” she said. “So this is about making sure that kids get good information, that they get it in a timely way.

“This is based on the evidence of people who work in child development and understand what kids are dealing with,” Wynne said. “It would be a very dangerous thing to pull that curriculum out of our schools.”

She emphasized the curriculum was put in place after a considerable amount of consultation with various experts from across Ontario.

“You know we talked to parents from all over the province, we talk to psychologists, psychiatrists, and educators,” the premier said.

University of Carleton political science professor Paul Thomas said he studied the curriculum issue with some colleagues when they were writing their book Religion and Canadian Party Politics.

“The first version of the curriculum was brought out in 2010 as part of the Dalton McGuinty government,” he said.

McGuinty was Ontario Premier from 2003 to 2013, when Wynne was the education minister, Thomas said. He said this update was done as, what the Liberals then thought, as an innocent update.

Thomas said these changes were reflective of the popularization and wide use of the internet, and also designed to address pornography, which has become easily accessible.

“The content children are being exposed to has changed. Kids are now being presented with more…explicit content at a younger age,” he said.

“All of the curriculum in the province is updated on a regular basis and this was just seen as a time the sex ed curriculum would come up,” Thomas said.

“It was brought forward and all of a sudden, I guess as it was being introduced, a number of social conservative groups and particularly a group called Canada Family Action Coalition, found out about it and it lead to protest, particularly around age appropriateness of content,” he said.

“Mr. McGuinty was asked questions about it and he initially expressed support for the curriculum,” Thomas said. “Then within 48 hours, actually reversed course and said it would be withdrawn.”

The curriculum developed further and was put together in a far more thorough way, with more consultation with parents and educators, he said.

Thomas noted an instance during a PC leadership debate when Ford was challenged regarding comments he made that there wasn’t consultation. He said he thinks the problem is that people, including Ford, did not like the result of the consultation.

“I think a lot of it is that and I say this as a parent myself,” Thomas said. “People may be in denial about the extent to which their children are able to access certain content online and even moreso about the behaviours they would engage in.”