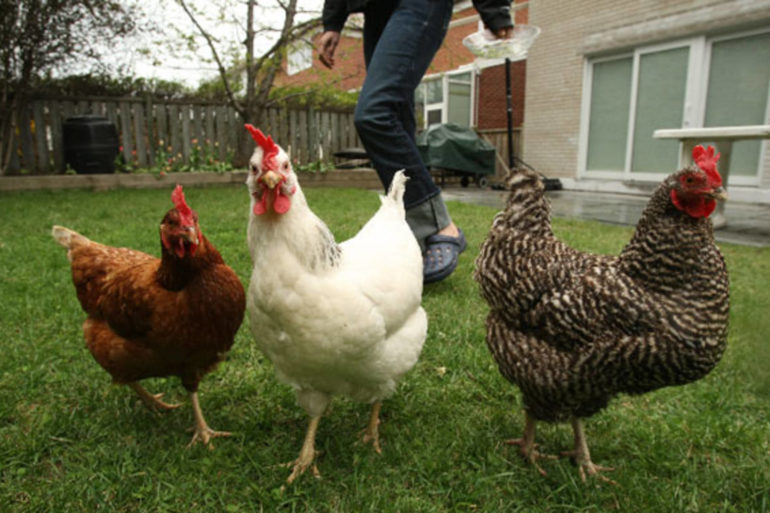 This June photograph shows a home in Vaughan where the family keeps chickens in their backyard. (CARLOS OSORIO / TORONTO STAR)

Beginning today, residents in four wards can raise hens in their backyards.  This new program allows Torontonians to keep a maximum of four hens within the confines of their backyard for the purposes of enjoyment and egg production.

The move comes amid the social push to eat locally rather than purchasing manufactured foods from major corporations.

Those interested in participating in the program must live within Ward 5 (Etobicoke-Lakeshore), Ward 13 ( Parkdale-High Park), Ward 21 (St. Paul’s) or Ward32 (Beaches-East York).

Participants are also required to register their hens with the city and construct a coop in compliance with local zoning requirements.

“Implementing regulations and  registrtion will hopefully make for a better life for all the hens,” said Doucette.

Participants in the program are subject to random inspections that will be complaint driven.  Doucette said non-compliance of the rules and regulations of the pilot program will lead to the removal of hens from ones possession by animal services.

“Our number one priority is that the hens are healthy and well cared for,” she said.

The test program will run for three years, coming to a close in 2020. However, if the program is proven to be a success by the 18 month review point the city will consider expanding it into other wards.

Those interested in owning hens and learning more about the pilot program are encouraged to attend workshops held by Toronto Animal Services and the Food Policy Council.

Workshops will be held at the following locations:

Their is also an option for interested participants to rent hens rather than owning them. This option is a great alternative for folks wanting to try something new without being fully committed. “You can rent hens in the month of May. You will be supplied with a temporary coop and then in October when it starts to get cold they will be picked,” said Doucette.

For more information about the pilot program and workshops available visit toronto.ca/urbanhensTO.