Suspect charged in assault on man with autism 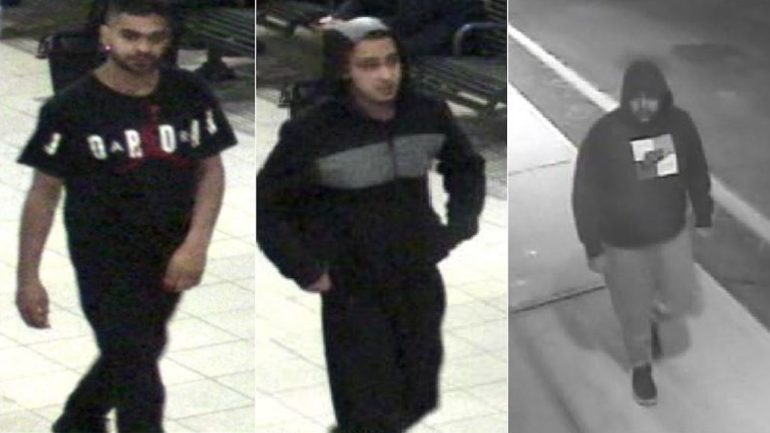 The three suspects in an attack on a man with autism were caught on video surveillance. (Peel Police)

One of the three men captured on camera brutally assaulting a man with autism has been arrested, Peel Regional Police said.

The video of the incident, which took place at Square One bus terminal, shows three men approach the 29-year-old man, who was sitting on a staircase. The video shows the men punching and kicking him, seemingly without reason.

The incident in the Hurontario Road and Highway 403 area lasted less than 10 seconds, and left the man with serious injuries, including a broken nose.

Parmvir Singh Chahil, 21, was arrested in Windsor and charged with aggravated assault Friday. Windsor police also arrested Hardip Padda, 44, and Harmanvir Chahil, 18, both of Border City and they are each charged as an accessory after the fact, police said.

His last known address is in Surrey, B.C., and he has no fixed address currently, according to Wednesday’s press release.

Dhami’s lawyer has informed police that he will surrender himself on Monday. He will turn himself in while maintaining his innocence, said Jag Virk, criminal defence lawyer for Dhami.

The search is still ongoing, regardless of when Dhami plans to turn himself in, said police.

“On our end, he [Dhami] is still wanted and if somebody still sees him, we still urge them to contact police,” Saini said. Dhami is described by police as being extremely dangerous.

The third suspect in the attack has yet to be identified, but may go by the first name of Jason, police said.

Investigators are continuing to receive information and tips from the public, Saini said.

Metrolinx has been cooperative with the investigation, she said.

“Our riders and employees have shared their revulsion with this senseless attack,” said Geoff Marinoff, Director of Transit with Miway Mississauga.

The transit terminals are designed with Crime Prevention Through Environmental Design (CPTED) to create public spaces that in part help to reduce crime, he said.

The video surveillance from the Square One terminal will likely be instrumental in making sure the perpetrators are charged, said Marinoff.

“This was a senseless attack that occurred without warning,” he said.