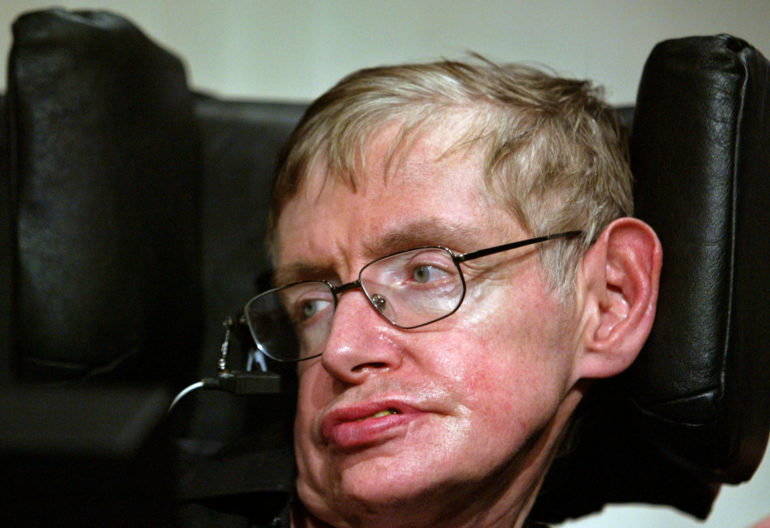 Stephen Hawking, one of the modern era’s most influential and inspirational scientists, has died at his home in Cambridge, England. He was 76.

He combined observations from Einstein’s theory of relativity and quantum mechanics to discover Hawking radiation.

“He did it quite early in his career,” said Cliff Burgess, Professor of Physics and Astronomy at McMaster University. “The important thing about his discovery about Hawking radiation is that it revealed rifts in between our understanding of gravity and quantum mechanics.”

Hawking and his colleagues went far beyond the previous understanding and showed that the concept of a black hole really tested many conventional ideas about space and time.

“While the black hole solution of Einstein’s Field Equations was found by (German physicist Karl) Schwarzschild in 1916, this was never properly understood until the 1960s and later,” said Charles Dyer, Emeritus Professor in Physics and Astrophysics at University of Toronto.

Hawking showed black holes can, like so many objects in our universe, shrink and die.

“For most physicists of the time, this was a major shift in paradigm, and required
serious re-evaluation,” Dyer said. “He was a leader in its development, and its explanation for other physicists.”

Professor of mathematics at Cambridge University Stephen W. Hawking discusses theories on the origin of the universe in a talk in Berkeley, Calif., on March 13, 2007. (REUTERS/Kimberly White/File Photo TPX IMAGES OF THE DAY)

Hawking took what was a difficult situation in his life, and made every effort to move beyond the apparent limitations. He turned some of the difficulties into advantages.

“I remember watching him lecture when I was a graduate student in this area,” he said. “The limitations he had with physical movement seemed to lead him to be much better than most of his colleagues at visualizing complex geometrical configurations in four dimensions.”

Hawking was 21 when he was diagnosed with ALS which weakened his muscles and resulted in the loss of body control. Unlike others who suffered from ALS who die within a few years of diagnosis, he managed to live for 54 more years.

But his ailment didn’t stop him from his work.

“He seemed to be seeing things internally without the limitations of those of us who are
more able to move in three dimensions often by moving our hands to aid in visualization,” Dyer said.

He also said Hawking’s contributions were not so much in the creation of new theories, but to develop a deep understanding of already postulated theories.

“Had Einstein lived to see some of the new understanding of the theory, he would have been astounded by how much was really there, far beyond what he understood of his own theory,” Dyer said.

With his sense of humor and ability to rise above the suffering, he was loved and adored by people around the globe. He was cast as a guest in a number of episodes of The Big Bang Theory and his character appeared in The Simpsons. Hawking was a living example of persistence and perseverance.

“He provided an example of tenacity and courage,” Dyer said. “One must have the audacity to play the game to fullest. Hawking certainly did that.”

British Prime Minister Teresa May described him as a brilliant and extraordinary mind in a tweet.

Professor Stephen Hawking was a brilliant and extraordinary mind – one of the great scientists of his generation. His courage, humour and determination to get the most from life was an inspiration. His legacy will not be forgotten.

Former president Barak Obama in his tweet bid farewell to the scientist.

Have fun out there among the stars. pic.twitter.com/S285MTwGtp

Obama presented The Medal of Freedom to Hawking in Washington in 2009.

NASA tweeted they remember the brilliant cosmologist who changed its view of the universe with his remarkable theories and outreach.

Today, we remembered Professor Stephen Hawking, who was a brilliant cosmologist that changed our view of the universe with his remarkable theories and outreach. Here’s a look back at Hawking’s relationship with NASA that spanned the years: https://t.co/KaSfCgctj7 pic.twitter.com/uSkSKhLn7V

Hawking wrote a book on cosmology, A Brief History of Time, which was first published in 1988. His life was detailed in the biographical romantic drama film, The Theory of Everything, in 2014.