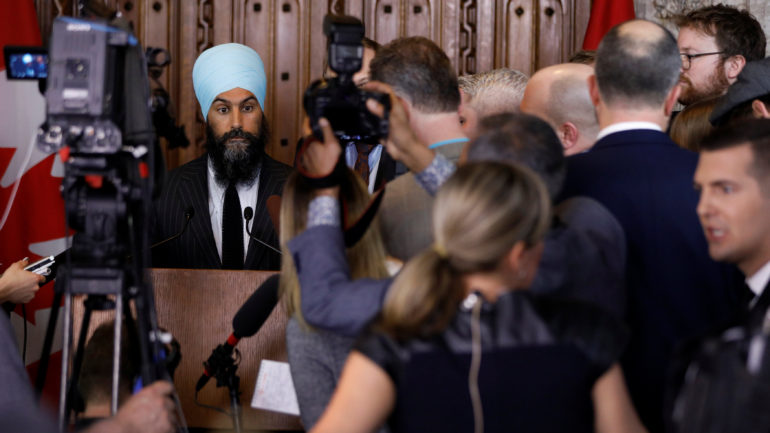 After the first video made headlines, Singh said he was invited to a Sikh rally in San Francisco in June 2015 to speak as a human rights advocate and not about an independent Khalistan.

Singh, who is Sikh, was among a number of speakers who spoke at a pro-sovereignty March for Freedom rally, which also featured a call for an independent state from a region now divided between northern India and Pakistan.

Questions of Singh’s attendance at the rally only surfaced Wednesday, although the video was published in 2015.

In a statement released Wednesday regarding his attendance at the rally Singh said that he was invited to speak at the annual event that commemorated the 1984 Sikh genocide.

“While there, I spoke directly about the pain in the community and my own path to learning about my heritage,” Singh said. “When faced with the knowledge that your relatives were targeted for who they were, you are faced with the question of how to respond.”

He said the Ontario Legislature recognized in 2017 the genocide that targeted a religious minority. Singh did not directly comment on the Khalistan independence movement in his statement but alluded that he has no say in India’s future and that he condemns all acts of terrorism.

“Terrorism can never be seen as a way to advance the cause of any one group,” he said. “It only leads to suffering, pain and death.”

“Questions regarding the future of India are not for me to decide,” Singh said. “I am not a citizen of India or an Indian politician.”

In 2013, while serving as an Ontario NDP MPP for Bramalea—Gore—Malton riding, Singh was denied a visa by the Indian government. He is still ineligible to visit the country.

The news of Singh’s attendance at the rally comes after Prime Minister Justin Trudeau faced scrutiny during his trip to India by the Indian government for being too lenient on supporters of the Khalistan movement.

Trudeau has made it clear that Canada supports a united India.

“Canada has been unequivocal, both myself, all my ministers, our government on a policy of one united India. We have, we have been very strong on that and we’ll continue to be,” he said.

Trudeau, Progressive Conservative leader Andrew Scheer and Green Party leader Elizabeth May have yet to comment on Singh’s attendance at the rally.

Singh was asked in a CBC interview in October 2017 about the appropriateness of Sikh temples in Canada displaying posters of the alleged leader behind the Air India Bombing, Talwinder Singh Parmar, identifying him as a martyr.

The 1985 bombing was believed to be in retaliation against the Indian government for its involvement in removing Sikh militants from Sri Harmandir Sahib — also referred to as The Golden Temple — which is one of the most cherished spiritual sites of Sikhism.

The Air India attack killed 329 people, most of them Canadians, and was the deadliest terrorist attack involving an airplane before September 11, 2001.

Parmar was killed by Indian police in 1992 and was never formally convicted for his alleged involvement in the Air India bombing.

Although Singh called the Air India attack a “heinous massacre” in the interview, he didn’t specifically condemn Parmar.

After the CBC interview was aired, Singh told reporters he took offense to being asked a question regarding the Air India attack.

“I think there was definitely some sort of clear problematic line of thought behind that question, so I’m definitely concerned,” he said. “It was offensive to me that that was even a question. It is so obvious, that any Canadian would unequivocally denounce anyone who is held responsible.

Terry Milewski, the CBC reporter who conducted the interview with Singh, was condemned by media outlets and journalists for proposing a “racist” question toward Singh. However, in a Twitter exchange on Wednesday, Milewski laid out what he believes to be the facts supporting the idea that Parmar was the architect behind the Air India bombing.

Don’t listen to nuts saying it’s “unsolved.” The bomb-maker was convicted 3 times. He confessed he built the bombs for Parmar, a fact confirmed by surveillance. At trial, the defence, crown and judge all agreed Parmar led the plot. Ditto the judicial inquiry. Facts matter.

After the March for Freedom rally video featuring Singh made headlines on Wednesday, a second video of Singh speaking alongside a Sikh separatist surfaced.

The video features Singh, Harwinder Singh and Shamsher Singh (no relation between the three) speaking at an event hosted by the National Sikh Youth Federation, an organization that supports an independent Sikh state.

At around the 2:20 mark, one of the speakers, Shamsher Singh, mentions “violence as a legitimate form of resistance and survival” as the right to sovereignty. The statement in question raises eyebrows after Jagmeet Singh recently condemned any act of terrorism or violence.

The Federal NDP leader has yet to comment on his participation at the National Sikh Youth Federation event.

Legal  Counsel for the World Sikh Organization of Canada Balpreet Singh, told Humber News he believes the media coverage over the past month has lacked context and nuance.

“I think there’s a general misunderstanding that there’s some sort of extremism or radicalism in the Sikh community which isn’t substantiated by any facts,” he said. “The only violence that’s been pointed to in the context of this story is violence that took place decades ago.”

Singh said he believes what it really comes down to is a clash of politics.

“What we’re really talking about is people expressing political views and I guess there’s different perspectives on separation and separatism,” he said. “To suggest that people speaking about human rights abuses or separatism are radicals or extremists is highly misleading.”

Singh said he’s not sure what Sikh extremist movement people are talking about because there hasn’t been violence related to the Sikh community or the issue of Khalistan for decades.

“What it looks like to us, from the Sikh community’s perspective, is that the Indian government and interests within the Indian media are uncomfortable with so many Sikh’s in prominent positions who are willing and able to speak about the human rights abuses suffered by the Sikh community in India,” he said. “The easiest way to dismiss those criticisms is to marginalize them as being extremists or radical or anti-national and that’s been a longstanding tactic used in India for legitimate dissent.”

Singh said individuals who have something to say that the government doesn’t appreciate or is willing to listen to, are often labeled as anti-national.

“Once someone is labelled in such a way they can be dismissed or even prosecuted, so that same tactic seems to be used here,” he said. “I mean if you look at what Jagmeet actually said in his statement, I don’t see anything objectionable in it.”