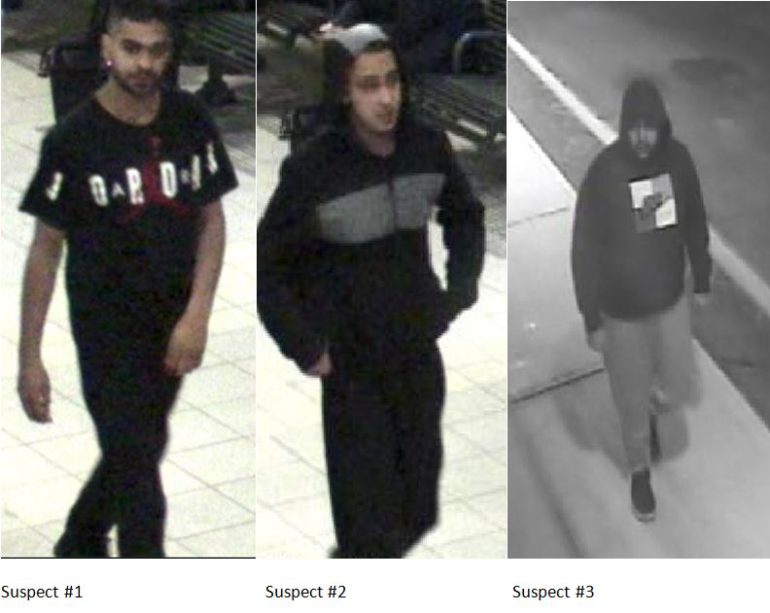 Peel Regional Police released a surveillance video on Wednesday in the hopes of catching three suspects seen assaulting an autistic man at a Mississauga bus terminal.

Police described the incident as “vicious and violent” in a statement.

The attack occurred on Tuesday around 10:45 p.m at the Square One bus terminal.

The 29-year-old victim was sitting on the stairs when three male suspects approached him, punching and kicking him several times within only 10 seconds.

Police said in a statement the victim was taken to a local hospital with serious but non-life-threatening injuries.

All three suspects were described as South Asian males, about five feet and 10 inches tall, according to Peel Police.

The first suspect was with a light complexion and thin build. The man had a dark short beard and straight black hair above the ears. He wore a black T-shirt with a red Air Jordan logo and white Jordan lettering, with black track pants and black shoes.

The second suspect had a thin build and was clean shaven. He wore a black jacket with a grey horizontal stripe across the chest and a grey vertical stripe along the hood, black track pants and black shoes.

The third suspect had a medium build and was unshaven. The man wore a black hoodie with a Nike logo on the front, white Nike lettering along the sleeves, black track pants and black shoes.

Toronto Mayor John Tory was among those asking for information on Twitter.

If you have any information, please help our next-door neighbours at @PeelPoliceMedia find the 3 suspects from this vicious assault of an autistic man in Mississauga. https://t.co/IkTdtUp7Ds

They probably told their mom’s they were ‘studying’ all the while perpetuating a thug-for-life lifestyle. Shame them. Losers. #CdnPoli https://t.co/7K5uvet9S4

Peel police say they are looking for three men after a “vicious” assault on an #Autistic man at a Mississauga bus terminal.https://t.co/xKng7n9YCd #Ontpoli #assault #disability #cdnppli

Police search for three suspects after ‘vicious assault’ of autistic man in #Mississauga Let’s help captures these idiots!https://t.co/CkbUCGtMB8 via @torontostar

Police are asking anyone with information to contact investigators at the 12 Division criminal investigation bureau at (905) 453-2121, ext. 1233.