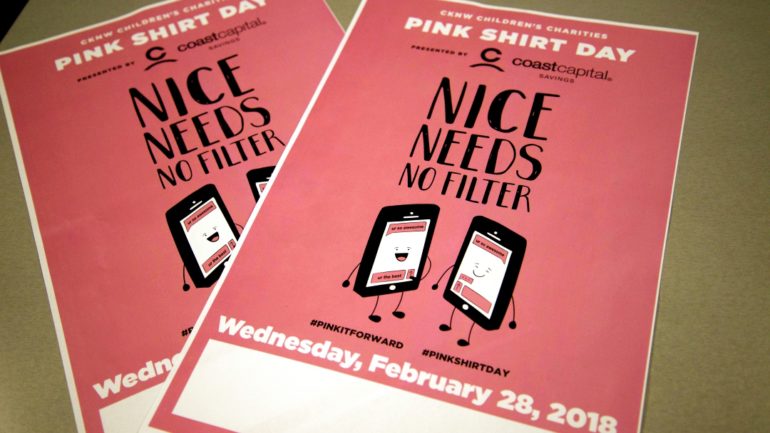 Pink Shirt Day, the anti-bullying campaign, marked its 10th year of combatting bullying and this year, the message is about “Thinking twice before posting something negative.”

Tomorrow is #PinkShirtDay! Join us tomorrow at the @LondonDrugs Plaza at Granville & Georgia to stand with us in the fight against bullying. Don’t forget your pink shirt! pic.twitter.com/59I9h7GAzz

By raising awareness and striking at the multiple types of bullying, the British Columbia-based anti-bullying campaign has attracted thousands of youth across the country.

According to Red Cross Canada, cyberbullying is using electronic media to threaten, embarrass, intimidate or exclude someone, or to damage reputations.

One of the most common types of cyberbullying is discrimination where bullies target people based on their characteristics and differences, including race, ethnicity, religion, sexual orientation and disabilities.

The annual #PinkShirtDay and”Anti-Bullying Day” is Feb. 28 and this year’s  theme was cyberbullying.

Anyone can be easily targeted by online harassment in the digital era.

“Cyberbullying can be an issue both for younger people in school and for adults,” said Andrew Selepak, professor in the department of telecommunications at the University of Florida.

“Individuals on Twitter are attacked for their political and religious beliefs and even threatened with physical violence toward them or their family,” he said.

“This is especially damaging, because it leaves an individual no place to escape from the bullying, because it happens every time they look at their phone,” Selepak said.

Public figures have contributed their voices to battling cyberbullying.

Tomorrow is Pink Shirt day 👚 and I’ll be throwing on a pink shirt to show my support! This year, Pink Shirt Day is encouraging others to combat cyberbullying by thinking twice before posting something negative, and instead using the internet to spread kindness!!💕#PinkItForward pic.twitter.com/WqsAyR6BnS

“Cyberbullying is a huge issue and many people are affected by it,” said Shawn Hook, a singer and producer from B.C. and an active supporter of #Pinkshirtday campaign.

“The issue with cyberbullying is that bullies hide behind keyboards and screens and can say or type whatever they want about other people and share it with the world,” he said. “The damage is palpable.”

People were asked to wear in pink to “symbolize that we as a society will not tolerate bullying anywhere.”

Pink is the new black! The @BCRCMP are proud to show our support for@Pinkshirtday by wearing our #PinkShirtDay shirts! pic.twitter.com/7BkQpvJ8I9

The program supported more than 59,000 youth and children across Western Canada in 2017, according to PinkShirtDay.ca.

“This (Pink Shirt Day) is a wonderful opportunity to create awareness that we need to stand up against bullying,” said Michelle McClure, executive director of Ability Online, an online community that supports children with disabilities, illnesses or other life difficulties.

“By taking a united stand and showing the pink shirts, we’re looking after vulnerable people that tend to be bullied,” she said.

“Find someone to talk to, don’t consider yourself alone,” McClure advised victims of bullying. “More importantly, let someone know it (bullying) is happening, even report to police if things get really serious.”

According to PinkShirtDay.ca, cyberbullying can often feel even more overwhelming than traditional bullying because victims are more vulnerable and can be targeted 24/7.

As the technology advances, it’s increasingly easy for bullies to damage others on the social network and harder for internet users to defend themselves.

“There is no real defense against cyberbullying,” Selepak said. He said that reporting posts and accounts on social media only has temporary impact and doesn’t guarantee the offensive contents will be taken down.

PinkShirtDay.ca has recently published Cyber Safety for people to defend themselves from online bullying and harassment. It suggests guarding personal information, such as identities, photos, email address, phone numbers and social media accounts, is extremely crucial to protect personal safety on the internet.