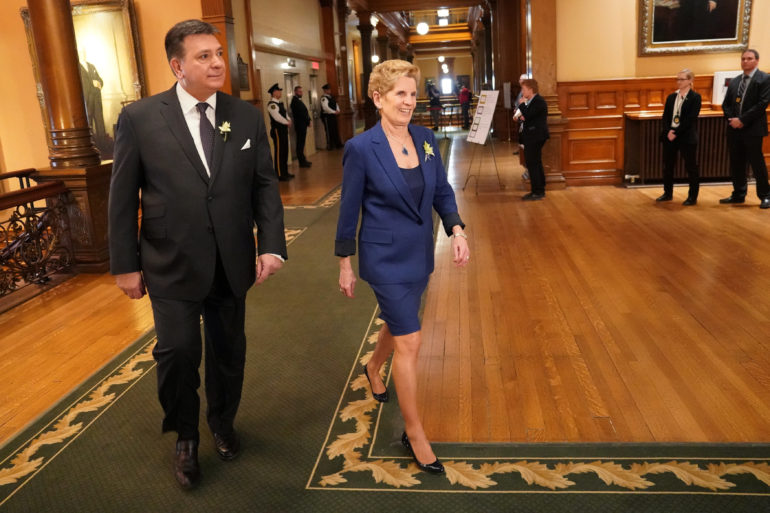 The Kathleen Wynne Liberal government is proposing to carry deficits of about $6.7 billion  per year over the next three years in order to finance its budget plans.

The 2018 budget released March 28 states the province is ending the fiscal year with more than $600 million in surplus. Minister of Finance Charles Sousa, who tabled the budget, said the government can afford a deficit because of the surplus and because last year’s budget was balanced.

Sousa said the government made a “choice” to go into deficit to fund $20 billion in new services, including mental health, hospitals, childcare and benefit plans.

“All of that requires us to provide and make that decision, and we decided to support them,” he said.

“Her cheques are going to bounce,” he said in a news conference following Sousa’s budget.

Through this, the Liberals are hoping to increase access to publicly funded psychotherapy, expand community services for children, and reduce wait times.

The Centre for Addiction and Mental Health (CAMH) will also undergo a redevelopment project under the province’s plan to provide hospitals an additional $19 billion in capital grants to improve infrastructure.

This project will include renovations to their forensic mental health services, and consolidation of research and support services.

The Liberals introduced a new drug and dental program that will reimburse individuals and families for expenses.

The program will start in the summer of 2019 and will pay back up to 80 per cent of drug and dental expenses. This means the province will pay a yearly maximum of $400 for single individuals, $600 for couples, and $50 for every child in the family.

“Fifty dollars? You can’t even get half a cavity filling,” she said.

The NDP revealed its dental plan earlier this month, saying they will provide universal care and cover the costs of exams, cleanings, fillings, X-rays, preventative and minor restorative work.

The Liberals plan to invest more than $106 billion on transit and transportation infrastructure over the next 10 years. The budget states this will support about 65,000 jobs a year.

This investment is on top of the $870 million the province used to build the Toronto-York Spadina extension that opened in December 2017.

The budget also states GO Transit trips within Toronto and under 10 km outside of the city will cost PRESTO users just $3 every trip.

Wynne is making accessible child care another one of her priorities. Her new budget states the province will invest $2.2 billion over three years to make child care more affordable because it is “an integral part of women’s economic empowerment.”

With this three-year investment the Liberals are hoping to provide free preschool for children before they start kindergarten. The government also estimated 111, 000 children will receive child care subsidies, which is a 20 per cent increase from two years ago.

Ford called it a waste of money.

“It’s amazing they promised billions of dollars for children that haven’t even been born,” he said. “I’m surprised that the finance minister and the premier aren’t up here giving away free cars. That’s next on their agenda.”

The budget was released 10 weeks before voters elect their premier on June 7. Both Ford and Horwath have yet to reveal their complete party platforms.