Leaders discuss possible changes to the voting process in Ontario 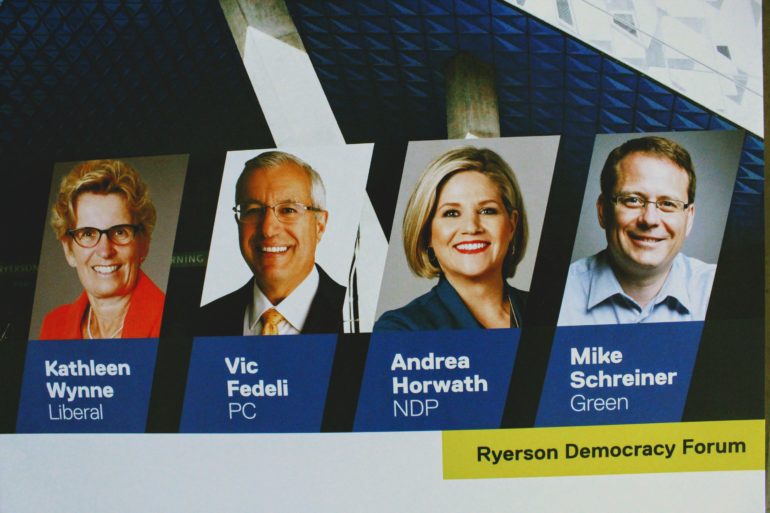 Political engagement by youth is so poor that provincial party leaders think lowering the voting age to 16 is a good idea.

But the four provincial leaders who gathered at a Feb. 28  leaders’ debate at Ryerson University also say there needs to be more political outreach in marginalized communities throughout the province.

Liberal Premier Kathleen Wynne suggested registering students to vote when they are in high school in order to engage younger citizens at an earlier age but Green Leader Mike Schreiner went farther by saying they should be able to cast a ballot.

“If you think about it that’s when your grade 10 Civics class is taking place,” Schreiner said.

The Ontario NDP leader also agreed with mobilizing youth and ensuring them that their voice does indeed matter. Ontario goes to the polls to vote on June 7.

“We try to have an active youth group to not only talk about issues when they become old enough to be leaders, but to say to them you’re leaders now,” she said.

“We want your input, advice, your insights now as a young person,” Horwath said. “Not just at some point in the future.”

If the audience was expecting a display of fiery and heated political debate, they would have been disappointed.

The politicians sat side by side each other on the stage, and were surprisingly in agreement on a number of issues.

The forum was specifically targeted towards discussing ways to boost youth voter turnout and improve political engagement in racialized communities. Cohn said youth and minority groups are likely to be under-represented yet again during the upcoming Ontario election.

Voter disengagement is especially high among youth, new Canadians, minority groups, and generally across the board, said Cohn.

He asked the Ontario party leaders whether low political engagement is a problem for democracy. “Who’s fault is it and what can we do?” asked Cohn.

Cohn said new Canadians are not turning out to vote in the same numbers as other groups, suggesting they don’t have enough information about the process and the parties.

He noted the Ontario PCs under Fedeli’s predecessor Patrick Brown made enormous strides reaching out to new Canadians.

“You see us out there trying to build trust,” Fedeli said.

However, Cohn said Horwath has previously told him that outreach by the party to marginalized communities is an issue she had personally struggled with.

“Because in all fairness the NDP was pretty white,” Cohn said. “How have you made out?”

Horwath said the party has to be inviting.

Horwath said that this is one of the missions she personally took on when she became NDP leader in 2009.

“There’s a reason why we have the first ever Sikh person, who is leader of a major political party nationally and that’s because Jagmeet Singh did the work that he did with us as a caucus,” she said.

Singh was her deputy party leader and MPP for Bramalea-Gore-Malton until he became the party’s national leader last year.

“I took him under my wing and I helped him with…what you do as a leader,” Horwath said. “That’s an amazing piece I was able to be a part of.

Fedeli suggested the province should consider adopting online voting to modernize the system and as a way to reach to people living in the digital age.

“In one word, modernize,” he said responding to questions about changes that need to be made.

“The way you work is not reflected in the government structure [of voting],” Fedeli said. He said people now mainly work using technology and mobile devices.”

Fedeli said the current system of voting is outdated and has not kept up with the modern world. He said voting today still consists of casting a vote with paper and pen inside a paperboard box.

“For example online petitions, you will go online and think you’re doing the right thing,” Fedeli said. “We in the legislature, we can’t accept them, our system is [that] you must have paper and live ink on a petition or it cannot be accepted.

“How is that inviting?” he asked.

The other leaders were apprehensive to some of Fedeli’s suggestions due to security concerns surrounding online voting.

Wynne said voting is a both a personal and communal act while Horwath lamented how the end of door-to-door enumerators weakened the voting process by cutting engagement.

Poster for the discussion on democratic engagement event at Ryerson University. (Taz Dhaliwal)