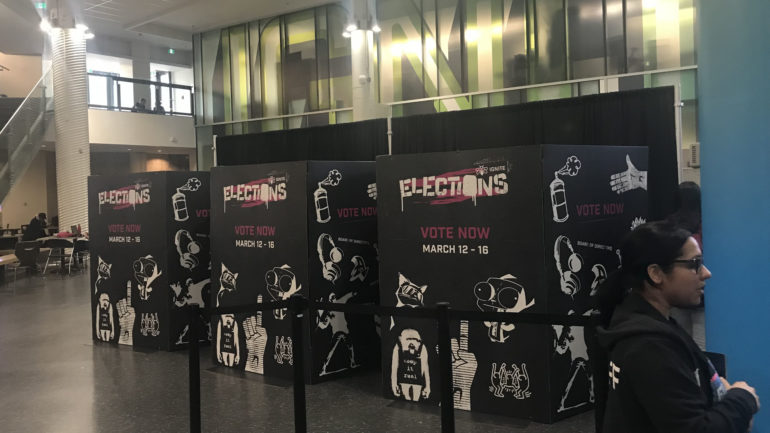 Polling station for IGNITE elections in the Student Centre.

It’s voting week at Humber College–a time for students to exercise their right to vote and chose who will represent them during their next academic year.

According to IGNITE, last year 7,059 students voted, which was only 23 per cent of the student population. IGNITE has posted a list of reasons why students should vote and is hoping for a higher voter turnout this year.

Polling stations are set up at all Humber campuses. At the North campus, stations can be found on the first floor of the LRC, in the student centre as well as at the University of Guelph-Humber. Students get to cast their vote for president, vice-president and members of the IGNITE board of directors.

Who is running for president?

The biggest position up for grabs is the role of IGNITE President. Managing the executive team, acting as the key spokesperson for IGNITE and planing advocacy initiatives and other IGNITE events are just some of the president’s duties.

This year, two candidates are running for student body president and both had a chance to win votes during an open forum on March 5 at the Student Centre. They both also spoke to Humber News.

Alissa Lim is the current vice-president of IGNITE at the Lakeshore campus. If elected, she hopes to alleviate some of the financial stress students experience, by working on a variety of projects, including expanding the free menstrual hygiene kit pilot program that she started this year.

“I will advocate ensuring that students have a vast variety of equal opportunities on campus to become involved. This can be done by creating opportunities in academics, student leadership, increase experience and student involvement. I will work to expand the Menstrual Hygiene project that serves to support students with financial needs, free products to use and breaking the stigma. I will expand the project by; ensuring that it is permanent, free dispensers and offer a larger variety of items for student use.”

Monica Khosla promises to take the time to listen to every student to find out where they need IGNITE’s help. Her platform includes making changes around campus to make life easier for students with disabilities.

“A better IGNITE ultimately means more awareness. I would like to see more students aware of and using the IGNITE services to their full benefit and potential. My vision is to have a student government that is more interactive, transparent as well as inclusive.”

Winners will be announced at 5 p.m. Friday March 16th.