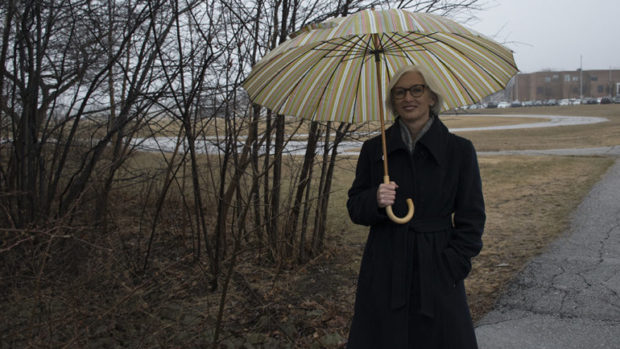 Moncrieff stands at one of her favourite spots in the Lakeshore Campus. She says this is one of the spots in the city where indigenous tribes would meet for trading their food. (Rucha Devarchetti)

Students at Humber’s Lakeshore campus do not find it odd when they see a woman standing in the path and staring at trees. Helena Moncrieff’s bubbling enthusiasm about fruit trees is so well-known that they can spot her from far off, staring at the orchard in the premises.

The communications professor’s unfazed passion for learning about the fruit trees in the city culminated into her book The Fruitful City, which was launched March 29. The book brings forward anecdotes of some of the oldest “residents” of Canadian cities – the trees that were planted for food.

Helena Moncrieff, professor of writing and media communications at Humber College, with her new book The Fruitful City. (Rucha Devarchetti)

“We got these trees that were planted by people, for a purpose before we got the concept of buying in bulk,” Moncrieff said. “Before we had refrigerators to store our food, we got it right off the tree. And now we have taken away their function and become fruit illiterate in the process.

“This book looks at the fruit literacy, the heritage of the tree, how they got here in the first place, and what it means to people,” she said.

But why write about trees when most people barely spare them a second glance?

“This book will appeal to anyone who grew up with parents or grandparents who used to be puttering in the garden all the time,” Moncrieff said. “Anyone who watched them take pride in their garden will get the stories, they will see them and wonder, ‘Why didn’t I learn?’”

She also thinks her book will be an asset to devotees of the 100-Mile Diet, food that is supplied within a 100 mile radius of where one lives and who have committed themselves to eating healthy, locally-grown food.

Moncrieff traveled all over Canada, including Toronto, Halifax and Vancouver, in search of anecdotes about indigenous trees as well as migrant trees that are thriving in urban landscapes.

Moncrieff’s master’s degree, which she completed a few years ago, was a major incentive for the book. As a part of her course, she had to work on a manuscript on her own. Her existing research about trees in urban spaces urged her to compile her work into a book and that set the wheels in motion.

There is a contribution by Humber to The Fruitful City.

“I showed the options of the book cover to my editing class at Humber, since the cover is usually the editor’s decision. I had an idea of what the book would look like but I wanted the opinion of a wider, younger audience. I also managed to incorporate some stories into the curriculum I taught,” Moncrieff said.

Her students also helped her in finding out more about backyard trees in the city.

“A lot of my students confirmed that fruit illiteracy that so many of us have,” Moncrieff said. “They also had stories of their own grandparents, stories of their trees, their homes and I even got some different perspective on the fruit from my international students.”

Moncrieff’s book will be launched at The Drake Commissary on Sterling Road.