Suspect in France hostage-taking has been shot dead 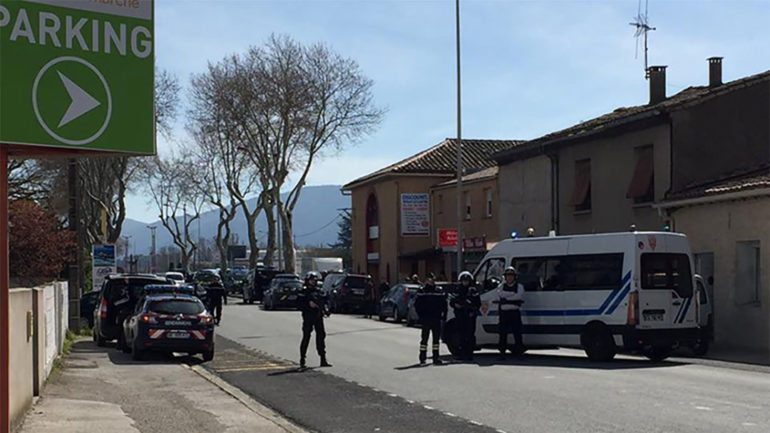 Police are seen at the scene of a hostage situation in a supermarket in Trebes, Aude, France March 23, 2018 in this picture obtained from a social media video. LA VIE A TREBES/via REUTERS ATTENTION EDITORS – THIS IMAGE WAS PROVIDED BY A THIRD PARTY. NO RESALES. NO ARCHIVES. MANDATORY CREDIT.

Police have shot and killed a gunman holding hostages in Trèbes, France according to the Associated Press.

BREAKING: Suspect in hostage-taking situation has been shot to death by French police, a police union official says.

The gunman left two people dead and 12 others injured in a terrorist attack at a Super U supermarket in southern France according to multiple media sources.

French President Emmanuel Macron made a statement about the hostage-taking.

“Everything leads us to believe it is a terror attack” – French President Emmanuel Macron on ongoing #Trèbes hostage situation https://t.co/cABeHf80xK pic.twitter.com/Ez29rtrSIl

The gunman made it evident he is with the Islamic State Group according to reports.

According to French TV channels La Chaîne Info (LCI) and BFMTV, the gunman is reportedly demanding the release of Salah Abdeslam. Abdeslam is the only suspect linked to the 2015 Paris attacks.

One policeman was shot and wounded earlier while jogging with colleagues 15 minutes away from the supermarket by the same gunman.

The gunman is known to police intelligence, BFM TV reported.