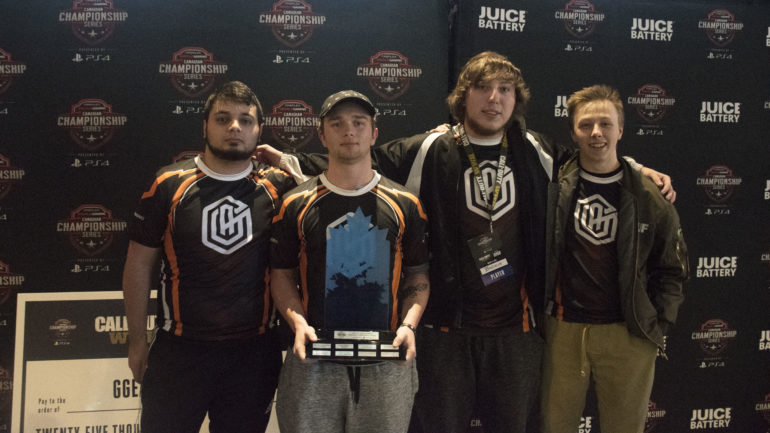 The top eight teams in North America battled for $60,000 in total prize money with GGEA Orange taking home the grand prize of $25,000. The four-man squad fought against TopProspectClan, Mock-it Esports, compLexity Gaming and eUnited on various gaming maps including Search and Destroy, Hardpoint and Capture the Flag.

GGEA Orange’s Dakota “Nova” Williams was thrilled his team won the national championship and that his team’s hard work paid off.

“It feels good. It feels good to beat eUnited, too. Every time played ’em, it’s always close,” Williams said. “This is the first time we’ve ever beaten them at an event.” The tournament boosted GGEA Orange’s confidence as they prepare to scope out the competition in the Call of Duty World League Atlanta Open starting this Friday.

Wim Stocks (left) and Jahte Le at the entrance of the auditorium. (Amy Chen)

Last Sunday’s event at the Toronto Scotiabank Theatre was presented by Sony PlayStation 4 to a roaring audience at the sold-out auditorium.

Luminosity and FaZe, two of the best teams on the planet, battled each other in a match before the grand finals on Sunday, making the audience go wild. The crowd loved the use of a shovel by Luminosity’s Sam “Octane” Larew to make his kills.

To enter the arena, the audience first went through Jahte Le, who cosplayed as a soldier from the game, demanded in a drill sergeant voice that ticket-holders must drop down and give him 20 pushups, or dance or even do a backflip before entering.

Wim Stocks, the vice-president and general manager of WorldGaming, the company that organized the tournament, was thrilled by everyone’s enthusiasm.

“Just understanding eSports and understanding how big it is, when it’s not considered mainstream, is one of our biggest challenges,” Stocks said.

“But that awareness is growing, not only in Canada, but it’s growing worldwide,” he said. “The Overwatch League has helped propel the awareness of eSports, and mainstream audiences are getting it now because they understand how it is very much like a traditional sport now that these franchise-based teams exists,” he said.

“eSports has continued to grow since I’ve started. I started playing when I was 14 years old, and I’m 20 now. And seeing how big it’s gotten is actually crazy,” he said.

At the action-packed event, audience members were glued to their seats because PS4 gave out loot to lucky attendees who had matching ticket numbers during every intermission. Raffle prizes included giant olive green backpacks filled with COD: WWII memorabilia, t-shirts, as well as a grand prize of a new PS4 system. Outside of the arena, all eight Call of Duty: WWII players from Luminosity and FaZe signed autographs for fans.

“It’s really cool,” Berry said. “The event is really nice. It’s a lot better than what I actually expected. They treat us really well here, and I’m really proud of what WorldGaming for what they’ve  done here.”