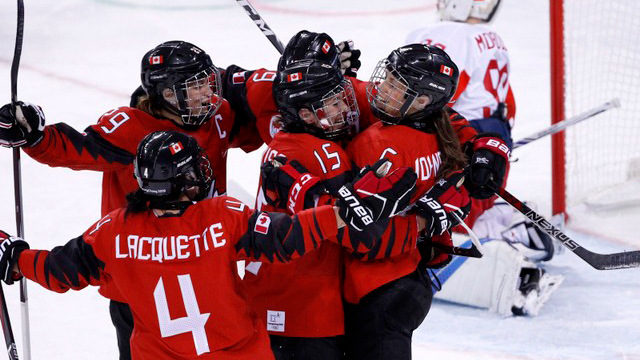 From the 1998 Olympic Games in Nagano to 2018 in PyeongChang, women’s hockey has made major strides in its progression as a sport.

With three gold medals and a silver to her name, defence Becky Kellar watched the women’s game evolve from a diversion from the men’s game when it was  introduced to the Olympics 20 years ago in Japan to becoming a major focal point of the Winter Games.

“The biggest thing that I have seen (in Olympics Women’s Hockey) is just the change of the calibre of play overall. My years, ’98 to 2010, the game improved so much,” said Kellar, 43.

Sami Jo Small, a three-time Olympian with two golds and a silver, also played in 1998 and feels the same way about how the sport has grown. Currently playing in the Canadian Women’s Hockey League (CWHL), Small said she’s seen growth not only in Olympics but women’s hockey in general.

“We currently have a women’s professional league, I play for the Toronto Furies, which is in the Canadian Women’s Hockey League,” she said. “For the first time this season our teams were paid a minimum salary, so thats a huge step.”

“The CWHL is a fantastic training ground for the girls who are Olympians but it’s also a great place for girls who aren’t quite at that Olympic level to continue to play,” Kellar said. “There are such a huge number of girls that are great hockey talents and you see those girls playing in that league.”

Women’s hockey in the Olympics often boil down to a Canada-USA final, as it did this year in PyeongChang. Small said she feels this doesn’t give the full representation of how every country has been progressing.

“Obviously it’s still the Canada versus US final,” Small said. “We had a 2006 final with Canada and Sweden. That was an upset that Sweden beat the Americans in the semi, but since that it has been Canada versus US.

Sami Jo Small making a blocker save while playing for Team Canada. (olympic.ca/teamcanada)

“That doesn’t mean other countries aren’t getting better,” she said. “It just means Canada and the US are still getting better. We are still at the point in women’s sports in general that we don’t know the capacity and potential of these women because they haven’t been given the same opportunities.”

With women’s hockey progressing, they have been getting more exposure to hockey fans, with the women’s games a major draw during the Olympics, but the CWHL is also starting to get some TV time, too.

“You turn the TV on and how often is there a women’s hockey game on? It’s more than it used to be, certainly would be great if there was more,” Kellar said. “Obviously I played it, I would love turn the TV on and watch a CWHL game, and there has been on TV this year, which is fantastic.”