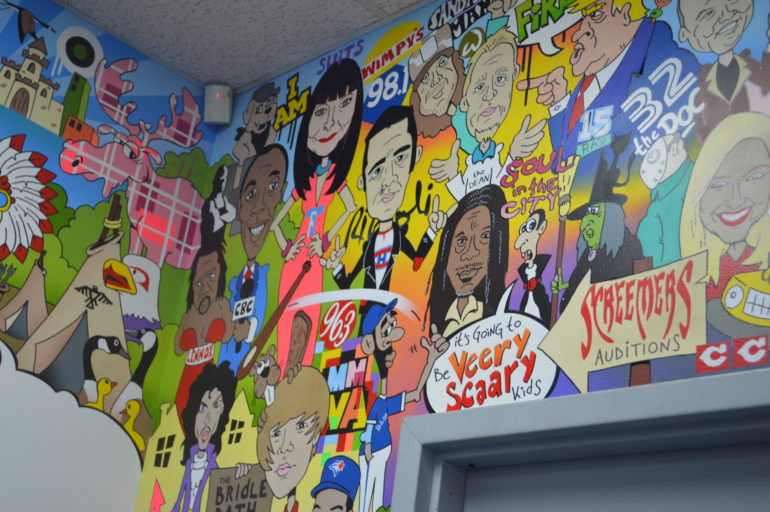 Near Keele and Flamborough there’s an artistic endeavor underway . A giant mural featuring several celebrities from the world of media, sports and local politics is being painted inside the Monte Carlo Laundromat.

Rob De Luca has owned the laundromat for ten years and has spent the last year unleashing nostalgia and neon on his walls. “… you have to distribute the paint so it’s not all clamped into one corner,” he remarked of the colour scheme.

With regards to his business being an unconventional location for such a massive project De Luca said “I own it, might as well just do it.”

CBC radio personality George Strombolopoulous in a Montreal Canadiens jersey and a nose piercing. The host is known for not rooting for the Leafs.

The mural is heavily influenced by television Canadiana over the last fifty years. Most of the caricatures and logos represent how De Luca “sees the six” in an iconographic way.

Del Luca received a cartooning certificate from George Brown College. His style, he said, was influenced by two main figures. In his youth De Luca said  his influences were Jim Davis and Sergio Aragones of Mad Magazine fame. Aragones “ was the creator of Groo the Wanderer. His style was amazing. I got a lot of it from him. Plus, I threw in my own style,” said De Luca.

To the surprise of some, De Luca’s teacher didn’t like his drawings,”She’s like “it’s too cartoony,”De Luca said. He’s spent over five hundred hours on the mural. The inspiration for him to start was the need of a creative outlet. He’s described the process as an escape from day to day stress.

The Wolfman of the Hilarious House of Frightenstein in the far left corner spinning vinyl and a self portrait of Rob Del Luca, the artist himself in the far right corner. This is currently being completed.

He said, “we got some celebrities like Michael Williams from Much Music he’s the DJ, Spider Jones, George Chuvalo, and we got a lot of radio personalities dropping by. It’s a big event. We’ve got a huge tent in the back, security, catering… it’s going to be crazy.”

Tickets cost $25  in order to attend the grand unveiling.  This is his first mural and he’s interested in doing more. For further updates on the mural follow the artist on Instagram: @the6mural.

Moses Znaimer from on high is depicted with two tablets engraved with retro labels from what some argue is the golden era of CHUM.

Drake and a nod to the days he was Jimmy on Degrassi: The Next Generation alongside Scarborough native Abel Tesfaye better known as The Weeknd

Commemorating the Rob Ford mayoral era when media outlets had daily updates on the controversial populist figure who wanted to “stop the gravy train.”