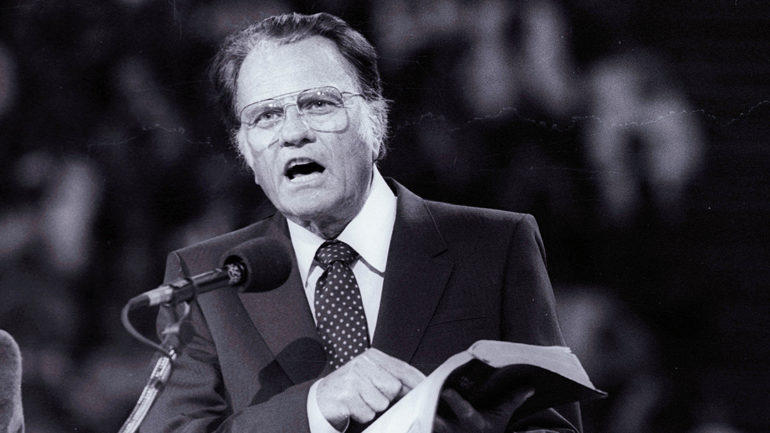 Evangelist Billy Graham, preaches the Gospel to thousands of believers during the meeting at Bercy’s Stadium in Paris as part of a worldwide crusade, September 20, 1986. REUTERS/Stringer/File Photo

The 60-year evangelical crusade of Rev. Billy Graham has come to an end. But his voice and words will remain monumental among Christians around the globe.

Graham, popularly known as America’s Pastor, died on Feb. 20 at the age of 99 at his home in North Carolina.  He was one of the world’s most famous preachers, known for his stadium-sized rallies.

Graham devoted his life to preaching at the young age of 16 but his major breakthrough happened in 1949 when he began preaching in revival tents in Los Angeles.

He came to Canada in 1955 and was able to draw large crowds to his mission, mixing his sermons with wit and wisdom.

“He is the greatest champion in the Christian ministry in the 20th century,” said Reg Andrews, a pastor at The People’s Church in Toronto, a church Graham visited in the late 1980s. “He was a man of humility and integrity and through his ministry, he taught us to achieve salvation through Jesus Christ,” Andrews said during a phone interview.

Graham addressed more than 200 million people all around the world and visited over 185 countries expanding his work.

“He addressed thousands during Maramon Convention, one of the largest Christian Conventions in Asia that takes place every February in Kerala, a southern state of India,” he said in an email.

Graham used the growing power of the media to spread his message. More than 900 radio stations aired his speeches and his column  ‘My Answers’ was published for more than 60 years in American newspapers.

Time Magazine referred to Graham as the “Protestant Pope” because of his non-denominational movement. He believed his mission was for everyone. During one of his crusades, Graham said that cultural, political or religious differences don’t matter.  He addressed controversial topics like abortion and culture wars and wasn’t without critics.

Graham was a counsellor to most of the American Presidents from Henry Truman to Barack Obama.

Former President Barack Obama said in a tweet that Billy Graham was a humble servant who prayed for generations of Americans.

Billy Graham was a humble servant who prayed for so many – and who, with wisdom and grace, gave hope and guidance to generations of Americans.

He was asked to address the people of America after the 9/11 terrorist attack by George.W. Bush, former President. His words were a source of comfort for thousands. American President Donald Trump tweeted that Graham was a great man and will be missed by Christians and all religions.

The GREAT Billy Graham is dead. There was nobody like him! He will be missed by Christians and all religions. A very special man.

Graham received a number of awards for his work. In the year 2001,  Queen Elizabeth II awarded him an honorary knighthood.