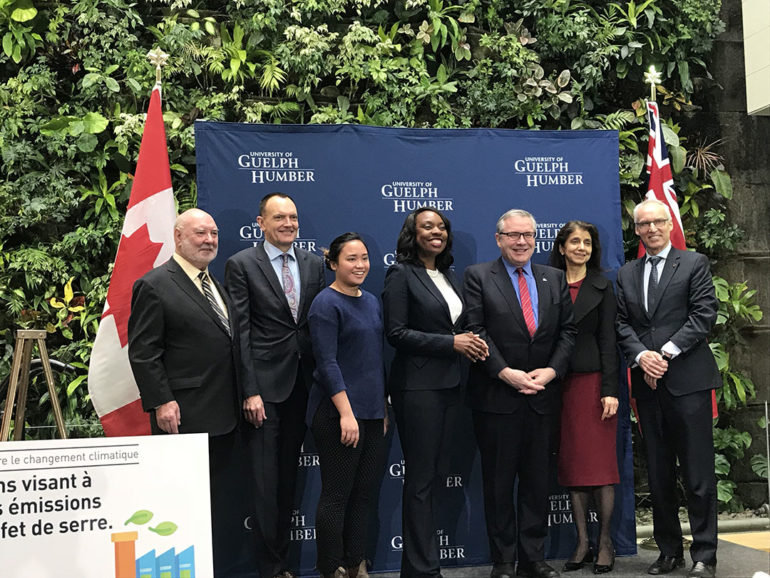 Universities and colleges in need of a retrofit to become more energy-efficient may be in for a boost thanks to a new action plan by the Ontario government.

Two Ontario cabinet ministers spoke in front of the University of Guelph-Humber’s living wall Monday morning to announce a plan to improve sustainability of the province’s post-secondary institutions.

Minister Hunter announced the new greenhouse gas campus retrofit program in which the Ontario government will invest up to 415 million dollars in grants and interest-free loans for college and university repairs and renovations.

The plan includes grants and interest-free loans to install energy-efficient windows and high-efficiency boilers. Retrofits to older schools will be set in place to significantly reduce energy consumption and greenhouse gas emission, improving their sustainability.

“So in other words,” said Hunter, “our government’s plan to fight climate change is paying for newer and greener campuses for our students to learn in the best environment possible. It is paying for dozens of pollution-reducing initiatives, so while critics of our climate change action plan are busy arguing over what to do about pollution of anything, we’re focused on fighting climate change by investing in students, in families and in communities”.

Chris Ballard, Minster of Environment and Climate Change speaking at the University of Guelph-Humber.

Ontario is required by law to invest proceeds from the carbon market into programs that help households, businesses and public institutions reduce greenhouse gas pollution. “As Minister Hunter alluded, Ontario’s approach can be summed up very simply, we’re capping greenhouse gas pollution and investing the proceeds from our carbon markets into projects to further reduce pollution and help make life easier for all Ontarians,” said Ballard.

Humber has already taken on a number of projects to improve sustainability.

“As we look back, the living wall was a symbol of strong sustainability culture within Humber. Since then, the college has reached significant achievements. For the last two years, Humber has been named one of Canada’s greenest employers, a significant achievement,” said Rani K. Dhaliwal, senior vice president planning, corporate services and CFO. “Sustainability is one of our core values and we as a leader within the college system value that”.

“So you can see around the campus now, we’re re-cladding buildings,” said Dr. Chris Whitaker, President and CEO of Humber College. “A lot of our old buildings are not energy-efficient. When you look at a lot of our buildings who were built in the 60s and 70s  they’re coming to a end of life almost and so by simply re-cladding, re-insulating, putting in new windows in addition to enhancements to our water system, heating systems, electrical systems, those are going to bring a lot of the results in terms of energy savings,”

According to Dhaliwal, Humber is already on the right track and  the college should see water and energy use reduced by 50 per cent and greenhouse gas emission by 30 per cent by 2034 .

Since the launch of an aggressive master plan set in 2015 to reduce it’s carbon footprint, Humber has reduced energy consumption by ten per cent and water consumption by 40 per cent, saving approximately one million dollars. Those dollars get reinvested in creating a cleaner learning experience for students.

There are currently no details on how much funding  Humber will receive from this new action plan, but Whitaker says those numbers  will be confirmed soon.

“Humber is already engaged in a long-term energy master plan,” Whitaker said. “We’re reducing water consumption, replacing our lighting system, so we’re doing a lot on that. As we build news buildings we make them more energy efficient as well so that’s built in to our long term master-plan for the campus and we’re just awaiting the results of applications for Humber grants specifically”.