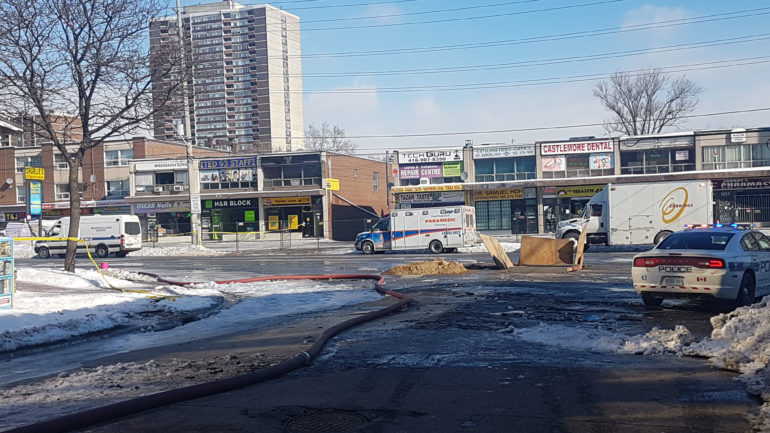 In a tweet, the Peel District Board said the school will be open tomorrow with no access from Hurontario.

It’s back to school on #Valentine’sDay for TL Kennedy students after building declared safe following massive explosion in #Mississauga that closed the school for couple of days. @PeelSchoolshttps://t.co/pe64JdRJhY pic.twitter.com/vpgE2706p7

The fiery blast, which took place near the high school on Sunday, forced about 50 people out of their homes and led to a number of local businesses to close down on Hurontario and Dundas, one of Mississauga’s longest and busiest streets.

Expected road closures between Hurontario and Dundas up to Hillcrest (near Cooksville Go Station.)

“The initial call came in at 7:30am Sunday, and the fire was extinguished at approximately 3:30am Monday.” said David Ferreira, Manager City Marketing and Planning with the city of Mississauga.

“The cause of the incident is still unknown, and that the investigation is still ongoing and being led by the Office of the Fire Marshall with the support from Peel Regional Police and Mississauga Fire and Emergency services,” Ferreira added.

Some residents described the explosion as loud and strong.

‘’You could feel the vibration from where they lived all the way to the seventh floor of their apartment,’’ said one Mississauga resident who refused to be named.

On Monday, the Mississauga Fire Chief, explained why it took some time to extinguish the blaze.

“The difficulty was a damaged gas main in the area as a result of the explosion, it took Enbridge several hours to shut down that gas line,’’ Tim Beckett said.

‘’That is why the fire seemed to burn for a long time. It is safer to let the gas burn than to shut it off, then to allow it to dissipate in the air,” Beckett said.

The explosion left 3 people injured and were taken to the hospital with minor injuries.

Peel police are also urging any witnesses to please come forward, who may have seen anything or gathered footage to call 3-1-1 with any helpful information.

Aftermath from the explosion caused businesses to be closed down for the day.