H&M temporarily closes all stores in South Africa amid protests 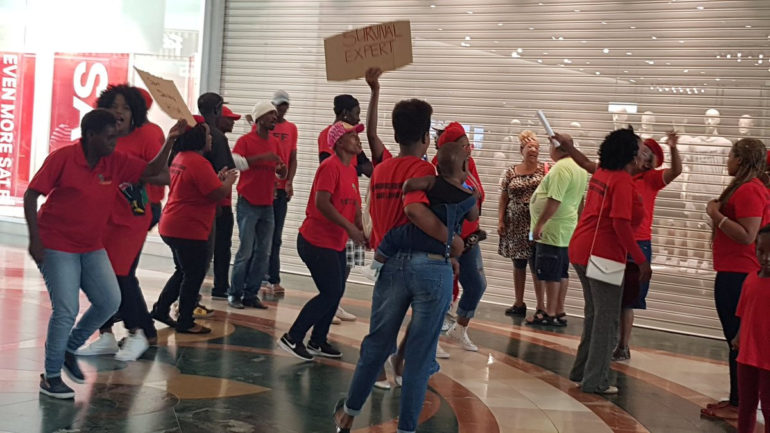 People protest in front of H&M store in Cape Town, South Africa, January 13, 2018 in this picture obtained from social media by REUTERS THIS IMAGE HAS BEEN SUPPLIED BY A THIRD PARTY. MANDATORY CREDIT.

Clothing company H&M has temporarily closed all of its stores in South Africa this weekend after protestors damaged several of them.

The protests were in response to the controversial ad released last week of a black boy modeling a hoodie with the slogan, “Coolest monkey in the world”.

H&M apologized for the image last Monday, and then again on Tuesday. The Swedish company had removed the image and stopped selling the sweatshirt.

After being aware of the protests, H&M immediately issued a statement on Twitter.

In SA Racists have been left unattended for too long, 23 yrs down the line. Today @hmsouthafrica was dealt with toe to toe. #EFF pic.twitter.com/LBivHHRe5A

A spokesman from EFF, Mbuyiseni Ndlozi tweeted that H&M’s apologies were a little too late.

“The time of apologies for racism are over; there must be consequences to anti-black racism, period!” Ndlozi wrote on his Twitter account.

Many of those protestors took to different social media outlets, specifically Twitter to post videos of them damaging merchandise and toppling mannequins.

Here is what the H&M shop in menlyn mall looks like. EFF member in Tshwane have given the shop 24 hours to close its doors permanently, they say failure to do so, will mean protests will continue outside of the store indefinitely. (@AlexMitchley) pic.twitter.com/a4gaxWED18

Police officers responded to the different protests and allegedly fired rubber bullets at the protesters who were vandalizing the stores.

Gauteng police have confirmed that they fired rubber bullets at the East Rand Mall to disperse EFF members who staged protests & vandalised 7 H&M stores around the province.

Despite protestors trying to prove a point to H&M by damaging stores, some from the black community were against the protests made by EFF.

Can someone please educate me how destroying an H&M store in South Africa cos of a racist ad in England makes sense? It’s not like the store in SA was selling the monkey hoodie.
By means get set up the ad but how is this an appropriate response?

It is really deceiving reading tweets which say ” let H&M close. We do not need it in South Africa. “

Who is going to employ your brothers and sisters?

Julius Malema, leader of EFF said in a speech on Saturday, “We make no apology about what the fighters did today against that store called H&M.” Malema added that targeting the stores is “just the beginning.”