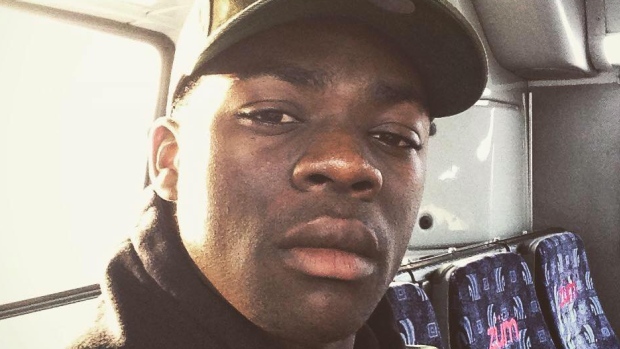 Family members of a Humber College graphic design student who’s been missing for 47 days are asking the public for help in tracing his whereabouts.

Emmanuel Boachie, 20, was last seen on Dec. 7 at his workplace in the area of Chrysler Dr. and Queen St. E. in Brampton.

Sherry Crawley, Boachie’s foster mother since he was eight years old, said his disappearance is totally out of character.

“It’s like he just vanished. And different scenarios run through your head and your mind just goes in the worst possible place,” Crawley said.

“He’s the diffuser, he’s outgoing and can make friends with anybody,” she said. “He’s just a loving guy, I know he has lots of friends that still go to Humber. A couple of them have reached out to me on Facebook.”

Crawley spoke to Boachie the day he disappeared to let him know that his grandmother was in the hospital after suffering from a stroke.

“For him not to call us or answer us, especially since his grandmother has passed away. To not go to work [where] he worked with his brother, something’s not right.”

Boachie, who “never skipped a class in high school,” had an appointment Dec. 8 to speak to a counselor about going back to school, but never showed up. Seven days later, he was reported missing by Peel Regional Police.

Humber News reached out to Peel Police for comment, but they didn’t get back to us in time for publication.

“We’ve sent messages to CP24, to CityTV, to CTV,” Crawley said. “He’s never been in trouble with the law, he didn’t have anything to run away from,” she explained.

Cherei Grouse, Boachie’s cousin, posted a tweet about his disappearance on Dec. 14. The tweet has more than 16,000 retweets and nearly 4,800 likes.

guys my 20 year old cousin has been missing from the Brampton area, he goes to Humber college, was last seen on Friday, won’t answer any calls or texts, hasn’t answered any social media & hasn’t showed up to work. Please please please rt & find him. pic.twitter.com/cdqhHDUxK7

Boachie is described as male, black, 6-feet tall, 190-pounds, with an athletic build, black short hair with a thin moustache and a little goatee.