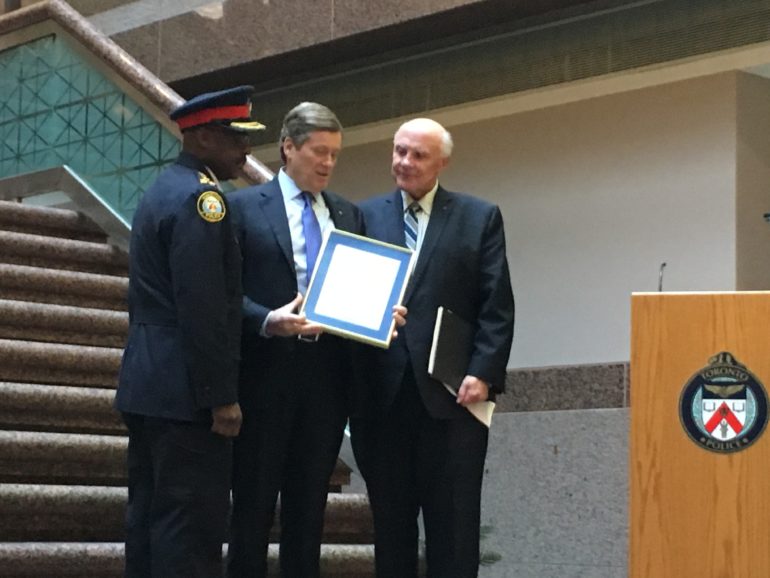 Toronto’s Mayor and Chief of Police urged the public to help fight crime as they launched Crime Stoppers Month at a news conference on Thursday.

In 2017 the Toronto Crime Stoppers program handled 12,701 tips, the highest in the program’s history.

Mayor John Tory and Chief Mark Saunders praised the trend and want more public participation in their attempt to build a safer community.

“This is a program that is not stale. It’s getting more awareness,” said Saunders.

Crime Stoppers is in 34th year and is a program that encourages private citizen to call the police to give tips and report on suspicious activity.

Saunders stressed upon the need for multi-language agencies when asked about the key factors and success of the program.

“Given the broader audience [this will help] to know that they can call and that they will be heard,” he added.

Crime Stoppers is the brainchild of Canadian-born Greg MacAleese, a detective with the Albuquerque Police Department in New Mexico.

After running out of leads during a homicide investigation, MacAleese appealed to the public for assistance. He produced a re-enactment of the crime, which aired on local television and radio. Anyone who provided information regarding the murder was eligible for a cash reward. Within hours of the broadcast, an individual called with information that led to the arrest and conviction of two suspects.

The program has been implemented in more than 1,300 communities worldwide. Hamilton was the first city in Ontario to implement the program and there are currently 90 programs across Canada with 38 programs currently in Ontario.