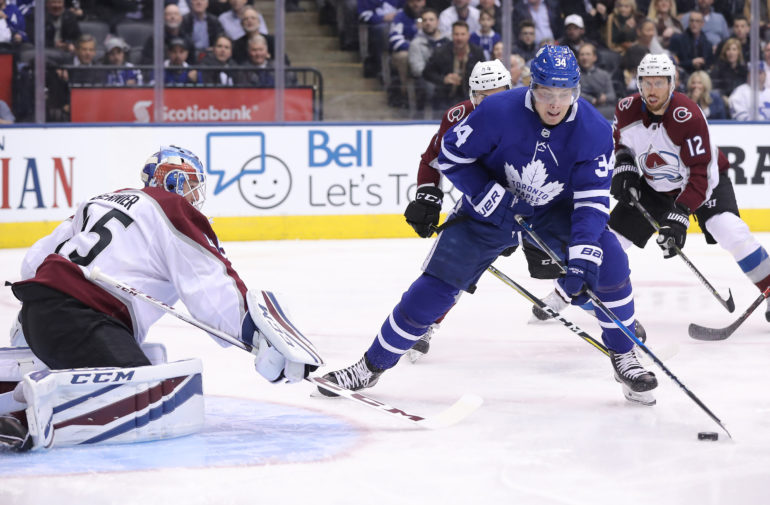 All eyes were on the Toronto Maple Leafs Monday night who tried to end the Colorado Avalanche’s nine-game winning streak but instead were the next victims to fall to the NHL’s hottest team.

Colorado’s streak is now at 10 wins in a row, a league best after the 4-2 triumph. Colorado’s win was good for the team but it was particularly sweet for one player.

A familiar face, but in a different dressing room, Jonathan Bernier, who has been the hottest goalie in the league since the new year, stunned his former team in a 29-save win for Colorado.

Bernier, who spent three less than spectacular seasons in Toronto, has been lights out so far in 2018, winning his ninth start in a row.

Sportsnet’s Shawn McKenzie spoke with Bernier after the win, and he admitted this game was one he had been eyeing for a while.

“That was a game I’ve been looking at on the calendar, and I thought we played really well as a team and we found a way to win again tonight,” said Bernier. “From the start of the season until now were playing really tight defensively were not giving up much, and I think our power-play and [penalty kill] has been outstanding.”

At times Leafs fans were chanting Bernier’s name in an attempt to throw him off. At one point giving him the “Bronx cheer” which he acknowledged after the game.

Jonathan Bernier on the bronx cheer from Leafs fans: "I had that one (the Bronx cheer) while playing for this team, so I think it’s not as bad when you’re the away team. It brought good memories."

As for the game itself, Toronto generated more chances than Colorado.

Auston Matthews also had a goal disallowed for goaltender interference, which would’ve put Toronto up 2-1. Matthews scored on his very next shift, and comically celebrated by signalling the goal much like a referee.

A minute-and-a-half later, the Leafs turned over the puck in the neutral zone and Colorado made them pay by tying the game at two.

Matthews and rookie defenceman Travis Dermott were victims of miscommunication on Colorado’s winning goal with just over seven minutes left in the third period.

Although Matthews said the loss was frustrating, he was happy with the team’s effort.

“We gave ourselves a good opportunity to win tonight,” said Matthews. “We just made a couple mistakes there at the end and they capitalized on them but aside from those I thought we played a pretty good game.”

After the game, head coach Mike Babcock thought his side deserved a better outcome.

“I got texts from half the coaches telling me it should be a goal,” he said. “We didn’t lose the game because of that goal in my opinion, we had lots of chances, we had lots of opportunities, and they scored and we didn’t.”

Does he know what goalie interference is these days? "No"

In goal for the Leafs was Frederik Andersen who was good in a losing effort. He stopped 23 shots in the loss.

“I thought we played well I thought we had a good chance of scoring,” said Andersen. “I’d like to play a little bit better but those games happen. For me maybe make another big save or two.”

With the loss, Toronto has now lost five of their last six games. The team will now prepare for Wednesday’s game in Chicago against the Blackhawks.