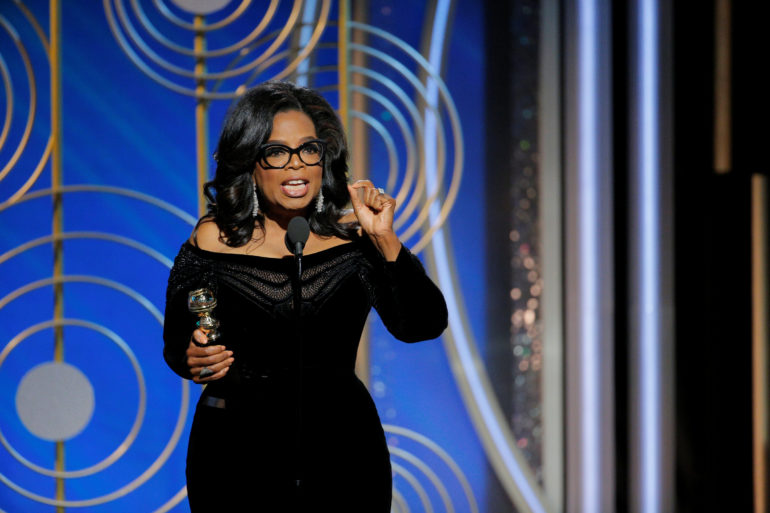 Oprah Winfrey speaks after accepting the Cecil B. Demille Award at the 75th Golden Globe Awards in Beverly Hills, California, U.S. January 7, 2018. Paul Drinkwater/Courtesy of NBC/Handout via REUTERS ATTENTION EDITORS – THIS IMAGE WAS PROVIDED BY A THIRD PARTY. NO RESALES. NO ARCHIVE. For editorial use only. Additional clearance required for commercial or promotional use, contact your local office for assistance. Any commercial or promotional use of NBCUniversal content requires NBCUniversal’s prior written consent. No book publishing without prior approval.

The highly anticipated 75th Golden Globes were held Sunday night in Los Angeles and many Canadians in the TV and film industry went home as winners.

The first award for the show went to Nicole Kidman, winning best actress in a limited TV series.

Nicole Kidman wins ‘Best Actress in a Limited Series or TV Movie’ at the #GoldenGlobes for Big Little Lies. pic.twitter.com/pTjp5kvisg

Kelley went on to praise the Montreal native when accepting the award for the best limited TV series saying,”He directed every single episode. He took this material into his heart and more importantly, he delivered it from his heart, elevating every page, every performance.”

Many viewers are buzzing about Canadian literary legend Margaret Atwood being praised by Elisabeth Moss, who won best actress in a television drama for her role in The Handmaid’s Tale. The show is based on Atwood’s best-selling novel of the same name.

In Moss’s acceptance speech she said,”Margaret Atwood, this is for you and all of the women who came before you, and after you, who were brave enough to speak out against intolerance and injustice and to fight for equality and freedom in this world.”

Even though the Golden Globes is a night dedicated to giving out awards by the Hollywood Foreign Press, much of the conversation was about the #MeToo campaign.

The #MeToo movement was a hot topic began in October when allegations against movie producer Harvey Weinstein were brought forward.

“One of the things that was so interesting about last night is that it was a night where the conversation was very much about speaking out and fighting back against sexual harassment and more opportunities for women in the industry,” Glasner said.

Many actresses and actors dressed in black to the award show to protest the countless sexual harassments and assaults happening not only in Hollywood- but in almost every field.

Actresses such as America Ferrera, Reese Witherspoon and Meryl Streep are just a few of the woman who recently launched the Time’s Up movement, in relation to the #MeToo movement.

Oprah Winfrey, who was the recipient of the Golden Globe Cecil B. DeMille Award gave an acceptance speech that highlighted the Time’s Up movement.

“I want all of the girls watching here now to know, that a new day is on the horizon.” @Oprah accepts the 2018 Cecil B. de Mille award. #GoldenGlobes pic.twitter.com/hbquC1GBjm

Glasner thinks Oprah’s speech was the most inspiring moment of the awards show.

“The idea of giving Oprah Winfrey the Cecil B. DeMille Award, I mean that was inspiring and that moment was, you could almost call it historic,” Glasner said.

“It was an amazing, passionate speech she made where she really kind of crystallized a lot of what’s being said right now, about how things are changing in the industry and what needs to happen next.”