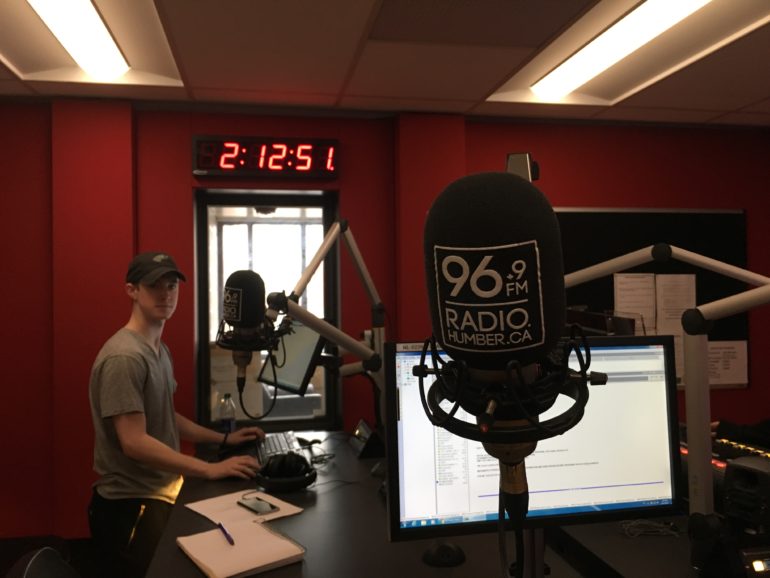 Radio and journalism students at Humber College’s north campus have access to a revamped studio after having to use the backup studio downstairs.

Previously the students were using a cramped studio due to the one on the upper floor requiring repairs. Aleema Ali, a journalism student, said the backup space wasn’t a comfortable place to record in.

“You can tell [the old studio] was temporary,” Ali said.

She said the old studio tended to get hot and was very cramped.

The improved studio was opened for the first time today after technical issues caused it to be out of commission since last December.

Robyn Foley, an award winning journalist and radio professor since 2012, said the studio was closed over major technical difficulties. Foley said instead of just fixing the technical issues, the damage was so severe that Humber opted for a complete overhaul.

Foley said that there is a feeling of coming home with the reopening of the studio but also a feeling of something brand new and impressive.

“It is state of the art,” Foley said.

The renovations make the space feel much bigger with room for guests, she said.

The room features a separate space for journalism students to commentate the news. The whole studio features several television screens, some displaying statistics and others various news casts.

Ali and Murissa Barrington, another journalism student, are excited to use the updated space. Both are thrilled with the fact that they finally have a “mute button” for when they are live.

“We call the mute button the cough button,” Ali said.

The former studio did not have a mute function for those live on air. Barrington said she feels less pressure knowing she doesn’t have to fear a cough or sneeze.

“I feel I can focus better,” Barrington said.

One thing both Ali and Barrington said they have to adjust to is the temperature of the updated studio. Both women said that the room is really cold. Barrington said the next time she goes in there she will remember to bundle up.