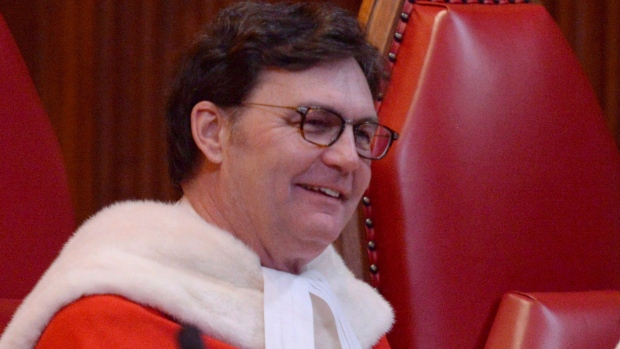 Justice Richard Wagner has been appointed the next Chief Justice of the Supreme Court of Canada by Prime Minister Trudeau, replacing Beverly McLachlin who is retiring after nearly 18 years on the High Court.

Wagner is being praised for having “bi-juridical capacity” which means he has expertise in Canadian common law and Quebec-specific civil law. Wagner also brings “flawless bilingualism” according to Minister of Justice Jody Wilson-Raybould.

“The prime minister has every confidence in the abilities and the breadth of experience of Justice Wagner to lead the court for potentially the next 15 years,” Wilson-Raybould said.

Wagner will take the oath of office on Dec. 18.

Wagner is replacing Beverley McLachlin, who was appointed to the Supreme Court in 1989 and become Chief Justice in 2000. On Friday, McLachlin presided over her last case and gave a heartfelt and emotional farewell.

“I was made a judge the trial court in 1981 before the Charter was adopted and we all wondered what lay ahead. Well now we know. And I’ve had the enormous good fortune to be a judge during this time when Canadian law, I think, has gone from strength to strength,” McLachlin said.

McLachlin was the first women to ever hold this position in Canada and has since become the longest sitting Chief Justice.

During her time as Chief Justice, the Supreme Court had notable rulings on language rights, freedom of expression and gender equality. The Supreme Court also ruled against some of former Prime Minister Stephan Harper’s main platform promises. This includes cases on prostitution, Omar Khadr, assisted suicide and Senate reform among others.

In 2014 her advice to Stephan Harper was ignored regarding the appointment of a Supreme Court Justice. This position is traditionally held for a judge sitting on the Quebec Court of Appeal or Superior Court. Harper appointed Marc Nadon to the Supreme Court, which lead to court challenging and then overturning Harper’s decision. Harper then called McLachlin’s actions into question, historically undermining the validity of the Chief Justice position. Although it was advised Harper apologize, he did not.

Despite controversy and bad blood with a sitting Prime Minister, McLachlin actively changed the judicial landscape of the nation during her historic career.

“Whatever lies ahead, I know that my time here will always be the centerpiece of my life.“

The Rt. Hon. Beverley McLachlin sat on 19 benches with 29 judges during almost 29 years of service on the #SCC. In that time, she heard over 2,000 cases and became Canada’s longest-serving Chief Justice. pic.twitter.com/sqOHFwGQ6x