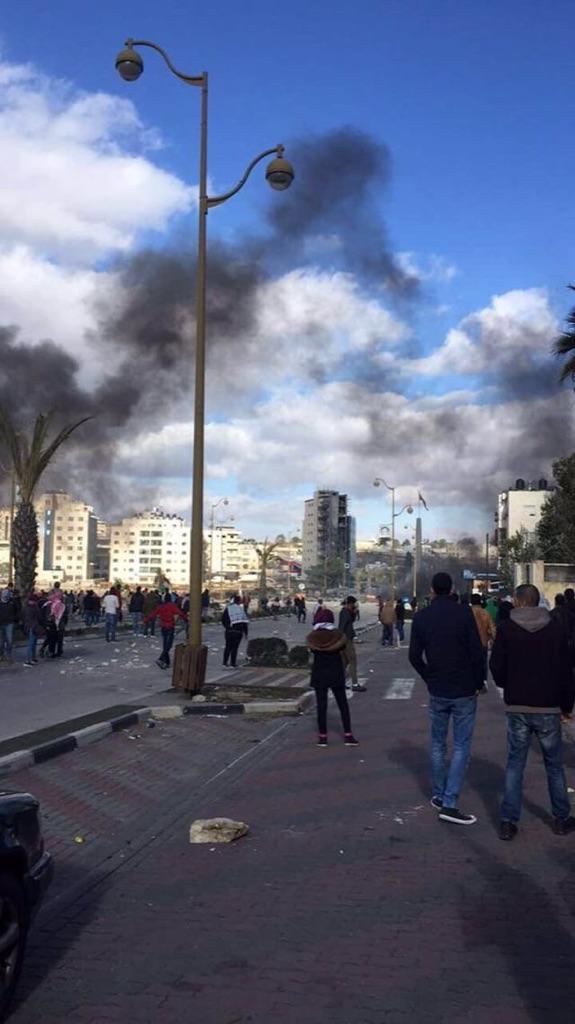 The protests in Ramallah, roughly 10 km outside of Jerusalem. (CONTRIBUTED Majd Masir)

By: Tyson Lautenschlager and Omar Jaber

A controversial decision by U.S. President Donald Trump to recognize Jerusalem as the capital of Israel has caused an uproar in the West Bank.

The streets of Jerusalem and the surrounding areas of Ramallah are full of Palestinians protesting the president’s move.

“I was out in the street for the marches. We as Palestinians reject the decision from the American president,” Majd Masri, a Palestinian resident told Humber News. “We now have much danger it seems of this decision for making our city, Jerusalem, the capital of Israel.

“We’re all really upset in the streets right now,” she said.

The president called this a move towards Middle Eastern peace but it has people like Masri questioning his rationale.

“It will destroy everything we’ve been trying to show to the world,” she said. “We love Jerusalem with all our soul because it’s the capital of Palestine.”

David Cape, Chair of the Centre for Israel and Jewish Affairs (CIJA), reaffirmed in a press release the Jewish belief that Jerusalem has been to home to the Jewish culture for thousands of years.

“Jerusalem has been central to Jewish identity since it was established as the capital of the Jewish nation three thousand years ago. Since the re-establishment of the modern State of Israel, Jerusalem has been the home to Israel’s democratically elected parliament, independent supreme court, and national government offices.”

Cape also wrote in the release that “Canada should formally recognize Jerusalem as the capital of Israel.”

But not everyone agrees, including Jeremy Corbyn, the leader of Britain’s Labour Party.

Trump's recognition of Jerusalem as Israel's capital, including occupied Palestinian territory, is a reckless threat to peace. The British Government must condemn this dangerous act and work for a just and viable settlement of the conflict.

Dr. Ghada Karmi, a University of Exeter professor of Arab and Islamic Studies, and a Palestinian, told BBC Newsnight that Trump is a “know-nothing president.”

“What the Middle East doesn’t need right now is a know-nothing American president like Donald Trump” – @ghadakarmi says Donald Trump’s Jerusalem decision does not acknowledge that Palestinians have any rights pic.twitter.com/thZBglBi2n

“The reality is, the American president has endorsed an illegal situation,” she said.