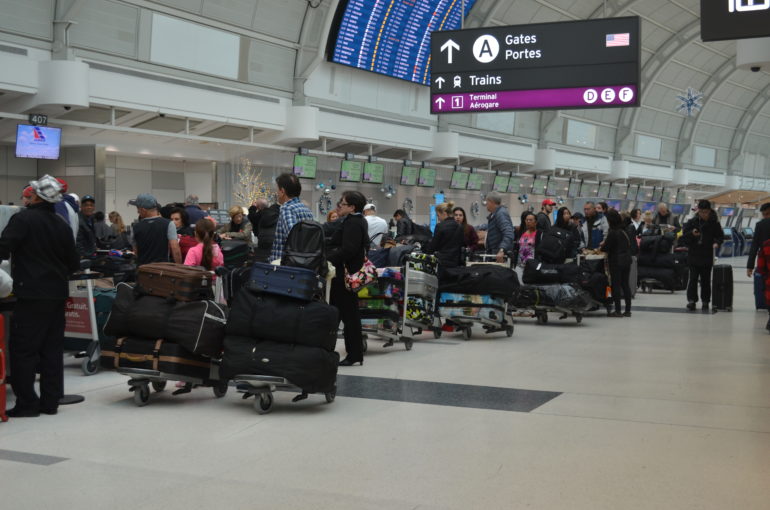 Lines at Pearson International Airport are long as today is the busiest travel day of the holiday season. (Alan Sebastian)

‘Tis the season to travel.

Canadian holiday travelers might be facing delays on Thursday at Toronto’s Pearson International Airport on the busiest travel day of the season, with 130,000 people are expected to use the airport.

“It was very busy between 4 a.m. to 6 a.m. Sunwing Airlines and WestJet had the most amount of traffic. According to the briefing we received this morning, it’s expected to be busier in the next shift, after 2 p.m. But the airport is well-equipped for crowd control,” said a representative from Pearson’s information desk.

Nearly 2.7 million people are expected to travel through the country’s largest airport between December 17 to January 7, up from 1.9 million last year.

The winter break is one of the busiest times to travel, second only to summertime travel.

“It’s not as crazy as we expected right now, but I’ve never had to wait for over 20 minutes to check in,” said Adrianna Griffith, before her trip to Cuba.

Long queues are expected and travelers have been advised to pack lightly along with keeping their Christmas packages unwrapped to save time at security checks.

This year’s traffic is up by 10 per cent as several airlines have added direct flights to international destinations. However, the snow warning for Dec. 21 and Dec. 22 in Toronto, is likely to cause further delays.

Travelers have been warned about delays and have been told to arrive early at the airport to make it in time for their flight.

“I decided to come in two hours early, just in case,” said Mark Cohen, who was waiting at the airport for check-in process to begin. Cohen said that he’s aware of the delays during the holidays as he travels often.

Passengers can also check-in online or through apps. They can also pay any baggage fees in advance and check the status of their flights, all of which can help them avoid unnecessary delays.