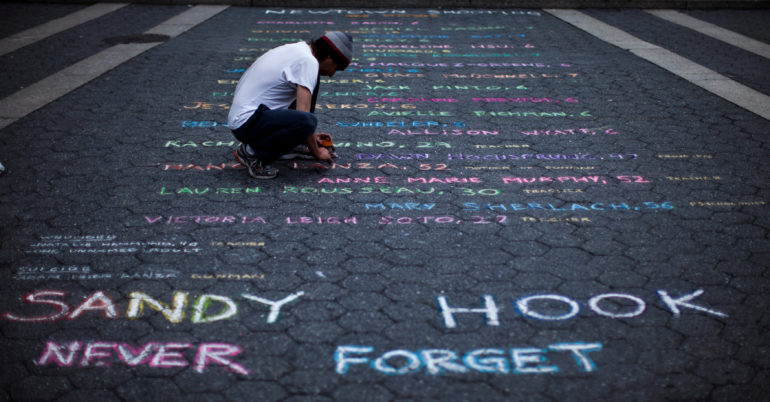 FILE PHOTO: Street artist Mark Panzarino, prepares a memorial as he writes the names of the Sandy Hook Elementary School victims during the six-month anniversary of the massacre, at Union Square in New York, U.S. June 14, 2013. REUTERS/Eduardo Munoz/File Photo

Five years ago today, one of the most heartbreaking school shootings in American history rocked the core of the United States, killing 20 young children.

Six teachers, who went to great lengths to try and protect the innocent kids in their classrooms, were shot dead at Sandy Hook Elementary School in Newtown, Conn. along with the 20 children. Countless others survived the attack, but the five-minute rampage changed the lives of all affected.

After the shooting, reporters and journalists from outlets across North America filled the streets of the quiet, suburban town.

The CBC’s Paul Hunter was one of those journalists.

Hunter, an acclaimed journalist who works in CBC’s Washington D.C. bureau, has covered his fair share of traumatic events in the past. He covered the infamous Paul Bernardo murder trial in Toronto, earthquakes in Haiti and most recently, the mass shooting at a church in Sutherland Springs, Texas. Hunter said Newtown was one of the most emotional.

“You know, I’ve seen a lot of awful things over the years. But there have been three times that I’ve cried,” he said. “And that was one of them.”

“I was just taking a breather and another reporter who I know came up to me to ask how things were. And we both just kind of looked at each other and it was that pause; the shield was down,” he said. “I wasn’t ‘the reporter guy.’ It allowed me to think for a second, which I think is what brought the tears out for both of us.”

At that moment, Hunter’s shield was down. The difficult thing, though, is keeping your shield up when working on a truly soul-crushing story.

“You put your journalist cap on and it’s a kind of protective device because you have to use your brain for other things, and your brain can sometimes protect your heart,” he said. “You’ve got a lot of work to do and you’ve got to cut through that stuff to get your story and your story includes the emotion that you’re hearing and feeling.”

In all, Hunter spent nearly a week in Connecticut covering the multitude of stories that came out of such a horrific event. One of those stories was that of gun control.

The debate on gun control was reignited during the aftermath of Sandy Hook. Hunter spent a day with a group pressing for changes to U.S. gun laws.

“We went to their initial meeting at a house in the outskirts of town. We hung out with them for a day just to get on the inside of the kind of grassroots organization that was going to at least try to shed some light,” he said.

Another story Hunter covered from Connecticut was when then-President Barack Obama visited Sandy Hook, pleading for gun control during a memorial. It was one of the most emotional moments in Obama’s eight-year term as president. Obama said he would use “whatever power this office holds” to prevent more tragedies like this.

Unfortunately for Obama, he wasn’t able to enact the change he wanted to.

“This is the president of the United States – the most powerful guy in the world who is tearing up, who is so motivated to affect change,” Hunter said.

“Then he ran into the wall that everybody who has ever tried to change gun laws in this country has always run into,” he said. “Covering the story, you felt like you were at the vanguard of change. It felt like a moment in history, and then it turned out not to be.”

When reporting on a tragedy like Sandy Hook, Hunter follows a golden rule of respect with each person he meets.

“I think another part of what allows a journalist to go through these things relatively unscathed is a rule that I follow myself, which is to always respect the people that you encounter,” he explained. “Never forget as you’re doing your job with your deadline looming and your iPhone ringing with the desk wanting something now is to respect what people are going through.

“That might mean that they don’t talk to you, and that’s okay. So turn away and respect their privacy and respect what they’re going through. If you respect the people that you’re meeting at any number of horrific events, then I think you’re doing your job as a human being.”