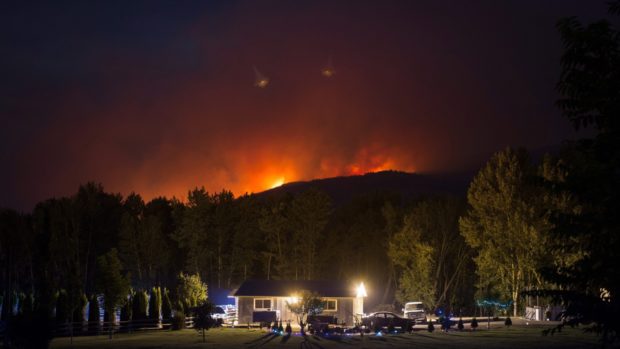 Canadian weather trends this year appeared to have a common theme nationwide – excess.

From the wet and mild conditions in the east to the hot and dry temperatures in the west, Environment Canada’s top 10 weather stories for 2017 all circled around unbalanced weather conditions.

David Phillips, senior climatologist for Environment Canada, said the theme of “too much” stood out to him the most and said that, in a way, it was even boring because it was so predictable.

“You got locked into a particular situation and it didn’t change and we as Canadians like change,” Phillips said. “We like change in our weather because you know if it’s miserable, in a few weeks not too far from now it’ll turn nice.”

The province had the driest summer ever leading to long and disastrous forest fires that caused about 500,000 residents to flee their homes and over half a billion dollars in firefighting costs.

The B.C. wildfires caused the longest state of emergency ever, lasting from July 7 until Sept. 15.

It was a year of extremes for B.C. with the province having a hot and fiery summer and a winter that was their second coldest in 25 years.

A number of weather events here in Ontario made it onto Environment Canada’s top 10 list.

Spring flooding in Ontario and Quebec came in third place and the flooding following a mega storm in Windsor came in at number five.

Coming in at sixth and eighth on the list, was the cooler than average summer temperatures with Ontarians finally getting their summer in September.

Phillips said that aside from this year’s “too much” trend, he also found the weather’s economic impact to be a topic of interest.

“I think in many ways, the year wasn’t as expensive as we’ve seen in other years,” said Phillips. “I think in 35 years of keeping track of the insurance losses, this came up to be number six or number seven in terms of total losses; that doesn’t even compare to last year which was dominated by the Fort McMurray wildfires.”

Today is also the first official day of winter and even though the forecast calls for up to 17 cm of snow, Phillips said it’s highly unlikely we’ll have a newsworthy weather event in the final weeks of 2017.

Heidi Stonehill, senior editor for the Farmer’s Almanac, said weather conditions for 2018 will be milder than usual across Canada.