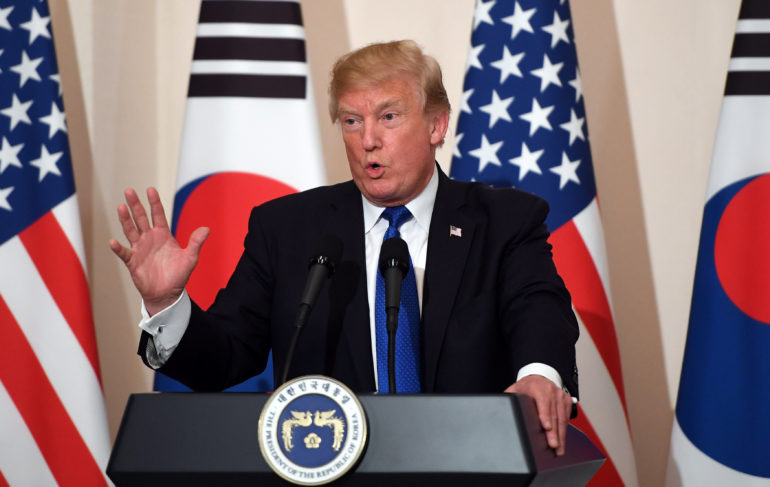 U.S. President Donald Trump is in South Korea today where he dismissed a question from a reporter on whether gun control could stop deadly American mass shootings.

“Well, you know, you’re bringing up a situation that probably shouldn’t be discussed too much right now. We could let a little time go by, but it’s okay if you feel that’s an appropriate question, even though we’re in the heart of South Korea,” Trump told the reporter in a joint news conference with South Korean President Moon Jae-in.

The reporter asked Trump if a better vetting process in terms of who should be eligible to buy a gun would help put an end to these deadly shootings. This comes just days after a former member of the Air Force who was dishonorably discharged killed 26 people at a church in small town Sutherland Springs, Texas.

“If you did what you’re suggesting, there would be no difference three days ago,” he said. “And you might not have that very brave person who happened to have a gun or rifle in his truck, go out and shoot him, and hit him, and neutralize him.

“And I can only say this: if he didn’t have a gun, instead of having 26 dead, you would have had hundreds more dead.”

The ‘he’ Trump is talking about is Stephen Willeford, a 55-year-old Sutherland Springs resident who is a licensed gun owner and former National Rifle Association (NRA) instructor, is being hailed a hero for shooting the alleged killer.

Gun control has been a big topic of discussion in the United States for years, but it’s become a more pressing matter over recents months following events such as the Texas church shooting and the massacre at a country music festival in Las Vegas that left 59 people, including the shooter, dead and more than 500 others injured.