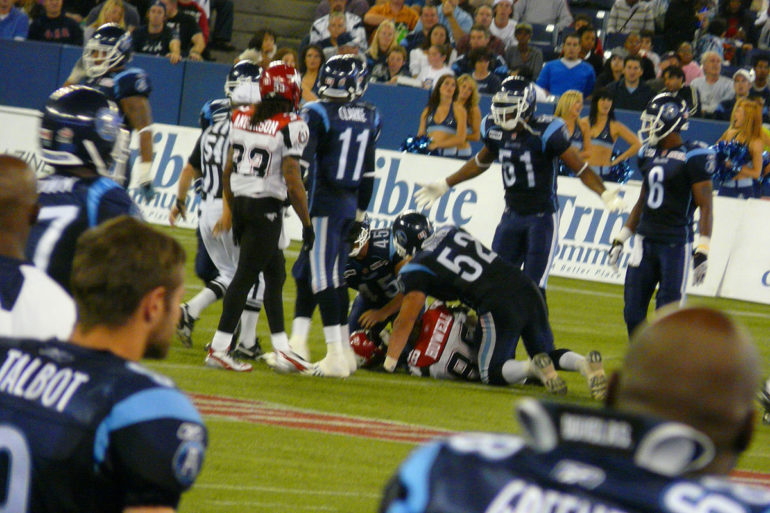 The Toronto Argonauts are Grey Cup champions for the 17th time in their franchise history and are back home to celebrate with the rest of Toronto. Quarterback Ricky Ray stepped out of the team’s plane hoisting the Grey Cup when they landed at Pearson Airport just before noon.

Ricky Ray hoists the Grey Cup. Says every athlete wants to go out on top. pic.twitter.com/9aGqvlNLCx

The celebration continues Tuesday with the championship rally scheduled for 12:30 p.m. at Nathan Phillips Square.

“It’s just a great finish to a great year with these guys,” said Argos quarterback Ricky Ray while walking through the Toronto Pearson terminal.

“Everybody put in so much work I’m just happy for everybody on the team.”

It was a thrilling snow-filled game that saw Toronto come out on top 27-24 over the Calgary Stampeders in Ottawa.

The game came down to the last play when Stampeders quarterback Bo Levi Mitchell threw a pass that was intercepted by Argos’ Matt Black with 20 seconds left in the fourth quarter.

“No matter how good you play or any one group played or an entire group together played as a team, at the end of the day we didn’t get the job done,” Mitchell said after the game.

Argos quarterback Ricky Ray threw for 19-of-32 for a total of 297 yards, keeping the game close right up to the fourth quarter.

Stampeders wide-receiver Kamar Jorden fumbled the ball at Toronto’s eight-yard line with 5:16 minutes left in the game, leading to Cassius Vaughn scoring a touchdown that set up a two-point convert.

Calgary failed to score in the ensuing possession with the score tied at 24.

Ray led the Argos down the field to set up kicker Lirim Harjrullahu for a 32-yard field goal that eventually gave Toronto their 27-24 victory.

Ray earned two of those Grey Cup rings in 2002 and 2005 with the Edmonton Eskimos, with his third in 2012 with the Argos in an identical match up to this year’s Grey Cup.

Following the game, there is speculation that Ray may be the best quarterback to ever play in the CFL.