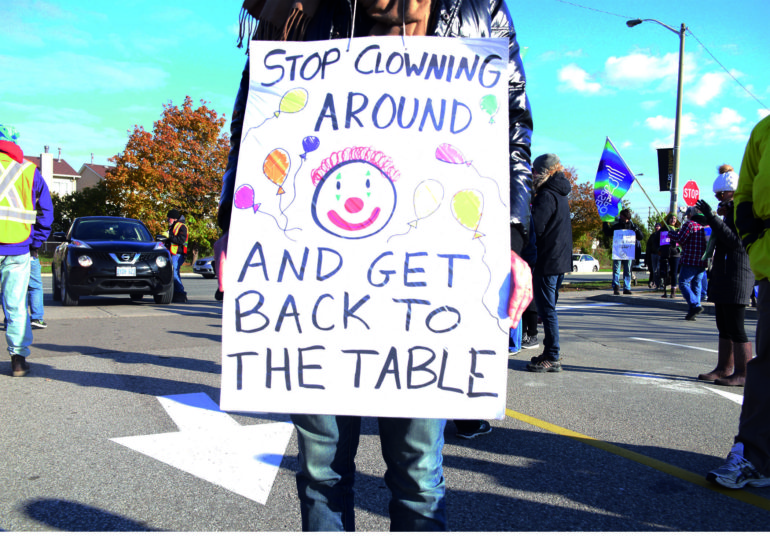 A picketer wears a sign encouraging the colleges to negotiate a new deal. (Tyson Lautenschlager)

It’s week four of the Ontario college strike and the College Employer Council is calling on a forced vote by faculty next week.

The Humber Faculty Union, OPSEU Local 562, held a larger than normal picket at Humber College’s North campus today. Hundreds of faculty showed up to protest, and even garnered support from other unions.

The union team is rejecting the colleges’ latest deal, calling it a “take it or leave it” offer.

Allan Sperling, a business school professor at Humber, is one of the picket captains on North campus. (Tyson Lautenschlager)

“I think most people, certainly the ones I’ve spoken to, will be voting no,” said Allan Sperling, professor in the business school at Humber College.

“The employers were very close to an agreement earlier this week and then the employers stopped the negotiation and then forced the presentation of their original offer to us. They’ve been negotiating for four days very actively, so it came as real disappointment to us that they did that.”

The colleges’ latest offer includes adding social workers and psychotherapists to the list of paramedical providers, and giving partial-load employees the same rights as full-time faculty to compete for full-time jobs.

The offer also includes an academic freedom policy that allows teachers the right to speak freely about academic issues without fear of their position as faculty being in jeopardy.

College faculty said contract teachers aren’t included in curriculum decisions and are often not informed about what worked and didn’t work for others teaching the same course. They said juggling multiple contracts doesn’t leave time to plan creative lessons, grade assignments with adequate feedback or meet with students outside of class time.

“The colleges could have forced a vote four weeks ago, but they waited to put pressure on students and faculty,” said Bob Bolf, Humber Faculty Union President.

“We are ready at the bargaining table for them to come back. We could come up with an agreement very quickly, should the colleges come back to the table. They are needlessly drawing this out for another week at least, maybe two weeks. Everybody loses, everybody suffers.”

Humber Child and Youth Care student Paula Greenberg said she would be willing to lose her semester for the faculty.

“It’s not just about me. You have to be not selfish about this,” she said. “As a student, sure, you pay lots of money. I think the college should actually pay us back. They should give us back our money, and we should demand it as students. Otherwise, we don’t pay that next semester.

“I’m putting in a call out to students: don’t pay. Don’t pay for this kind of treatment that the colleges have done to us.”

Bolf said Humber is saving money every week during the strike by not paying faculty their salaries.

“You got to ask yourself: follow the money. Who gains? Humber is gaining $3,000,000 because they’re not paying faculty. You are losing your tuition, and we are losing the job that we love,” he said.

No college student in Ontario has lost a semester due to a faculty strike, however, the risk is higher than ever with this strike being in its fourth week.

“The threat of losing a term now is more than it ever has been because it’s rare we’ve had a strike go on this long, and it’s rare that the colleges have ever manipulated faculty and students like they are now,” he said. “Like I said, we could have had this vote four weeks ago. They’re scheduling it for next week, and it could be as much as two weeks from now that we come back.”