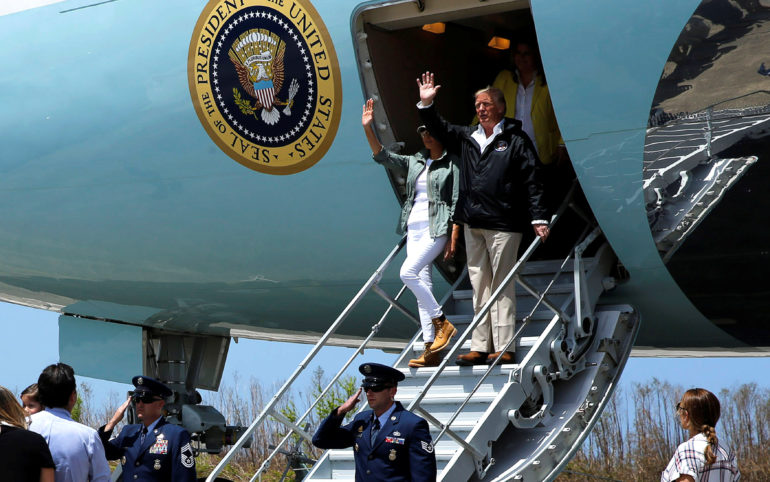 President Donald Trump visited San Juan, Puerto Rico on Tuesday to survey the damage, meet the locals and attend a briefing, almost two weeks after hurricane Maria made landfall on the island.

What was billed as a briefing on the hurricane relief effort turned into a public relations exercise with Trump praising his own administration for its response measures in Puerto Rico.

Trump, accompanied by First Lady Melania Trump, brought up the financial cost of the havoc on the island, which is a U.S. territory.

“I hate to tell you Puerto Rico, but you’ve thrown our budget a little out of whack because we spent a lot of money on Puerto Rico, and that’s fine,” he said.

He compared Maria’s death toll of 16 to that of a “real catastrophe like Katrina,” which was upwards of 1,000.

He then applauded the Democratic governor of Puerto Rico, Ricardo Rossello.

“Governor, I just want to tell you that… right from the beginning this governor did not play politics,” says Trump. “He was giving us the highest grades.”

Trump even shook hands with San Juan Mayor Carmen Yulin Cruz before the briefing. He had previously blasted the mayor on Twitter.

Cruz, who has been helping on the frontlines of San Juan’s flooded streets, caught Donald Trump’s attention over the weekend after calling out the lack of U.S. help efforts last week.

This prompted Trump to respond, tweeting out “Such poor leadership ability by the Mayor of San Juan, and others in Puerto Rico, who are not able to get their workers to help.”

The Mayor of San Juan, who was very complimentary only a few days ago, has now been told by the Democrats that you must be nasty to Trump.

Cruz’s response came about half an hour after Trump’s and focused on the hard work required in Puerto Rico:

The goal is one: saving lives. This is the time to show our “true colors”. We cannot be distracted by anything else. pic.twitter.com/7PAINk19xM

In the aftermath of both Hurricane Irma and Maria’s wrath, Puerto Rico’s approximately 3.4 million residents have been left without power, struggling with both food and water shortages.

Recovery in Puerto Rico has been slow since the economy of the U.S. territory was in recession and the government filed for bankruptcy back in May.

As of Monday, nearly 11 per cent of cell phone towers, 74 per cent of gas stations and 65 per cent of the supermarkets were open, according to the Puerto Rican government.

This visit came after the federal government continues to receive criticism for its slow response to Puerto Rico’s emergency in the wake of Hurricane Maria. Trump’s previous visits to both hurricane-devastated Florida and Houston occurred much sooner than this long-awaited trip to San Juan.

After the briefing, Trump went to the streets to meet some of the island’s victims.

Trump is scheduled to visit Las Vegas tomorrow following the worst mass shooting in U.S. history that occurred in the city on Sunday night.