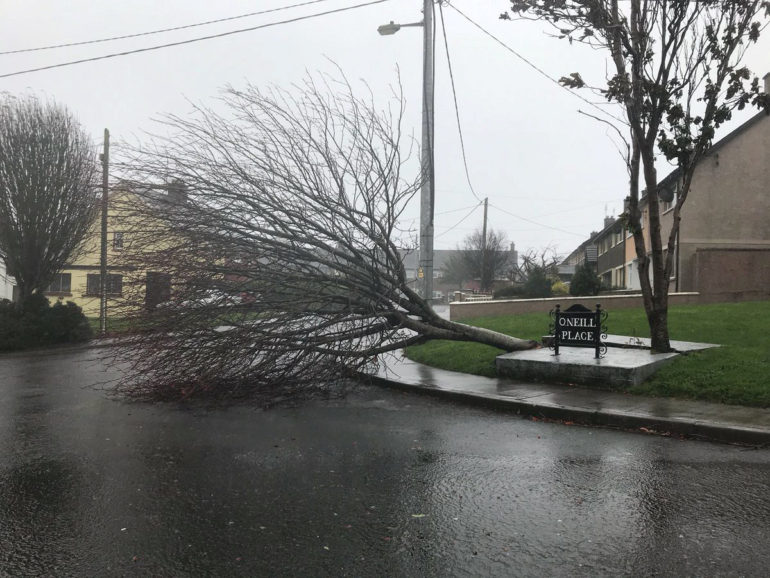 An uprooted tree lies in a road as storm Ophelia hits Cork, Ireland, October 16, 2017, in this still images obtained from social media video. KIERON O’CONNOR/ via REUTERS THIS IMAGE HAS BEEN SUPPLIED BY A THIRD PARTY. MANDATORY CREDIT. NO RESALES. NO ARCHIVES.

Three people have reportedly died as Tropical Storm Ophelia hit Ireland’s southern coast on Monday morning, wreaking havoc across the island with gusts of wind in excess of 130 km/h.

One man in his 30s died trying to clear a fallen tree with a chainsaw. Another two people – a woman in her 50s, and a man whose age is unknown at this time – were killed in separate incidents where trees fell on their cars.

Around 360,000 people are left without electricity as a result of over 3,200 individual faults on the network, said Ireland’s Electricity Supply Board. The board said most of the damage was caused by falling trees on overhead wires.

Dramatic footage of the roof being blown off #Douglas Community School’s gym on southside of #Cork city #Ophelia #iestaff pic.twitter.com/0dSw5w1rTj

“Public safety is our key concern today,” said Prime Minister of Ireland Leo Varadkar. “Advice is to say at home, no unnecessary travel or other outdoor activities.”

Met Eireann, the Irish National Meteorological Service, issued a red status warning for all party of the country on the ex-hurricane Ophelia, saying it’s continuing to track northeastwards and will bring violent and destructive winds.

Visible satellite images of Storm #Ophelia
Data from 10am to 2:15pm pic.twitter.com/wSg0CBuM0V

“Some flooding is expected also, due to heavy thundery downpours and storm surges in coastal areas,” the statement said. “There is a danger to life and property.”

Richard Bruton, Ireland’s education minister, said that a decision has been made with consideration from the National Emergency Coordination Group and the Department of Education and Skills that “all schools will remain closed tomorrow.”

Britain’s meteorological service put up an Amber Weather warning for Northern Ireland, parts of Wales and into the extreme southwest of Scotland, saying the storm posed a danger to life and would likely affect mobile services, transportation services and power cuts.

A Yellow Weather warning was posted for Southwest England and Southwest Wales for “a spell of very windy weather” with cancellations and power cuts possible to occur.

The Irish government said this storm is likely to be the worst in Ireland since Hurricane Debbie left 11 dead in 1961.