Somalia reeling after death toll rises over 300 from truck bombing 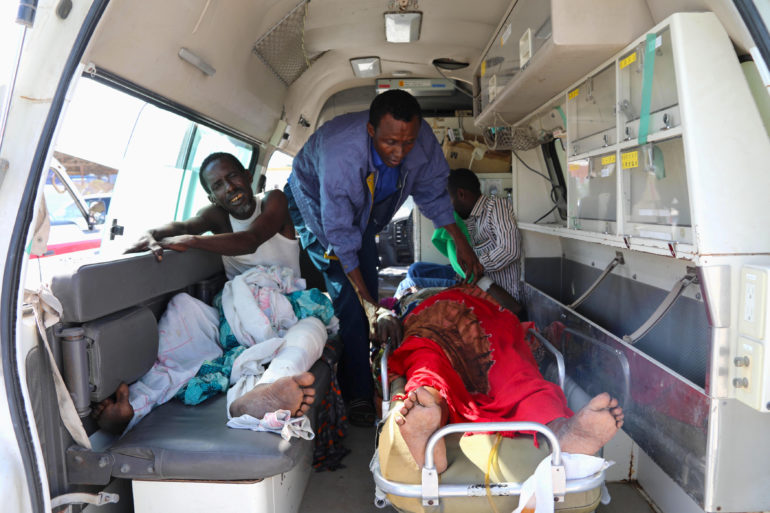 Civilians injured during an explosion last Saturday in KM4 street in the Hodan district waits to board a Turkish military plane for medical evacuation at the Aden Abdulle International Airport in Mogadishu, Somalia October 16, 2017. REUTERS/Feisal Omar

The death toll from a deadly truck bombing on Saturday in Somalia’s capital has risen to more than 300 people.

The bombing occurred on a crowded street in Mogadishu, where approximately another 300 people were also injured in the blast.

This is the deadliest attack in the Horn of Africa nation.

Hospitals are overwhelmed in providing medical care for the wounded victims and some of the injured are being airlifted to Turkey for treatment as international aid arrives.

Countries including Kenya and Turkey have offered medical aid and support.

Minister of Health of #Turkey arrives in #Mogadishu as a solidarity with victims of the barbaric attack on 14 October 2017 – Turkey has won the hearts and minds of Somali people by providing direct support that is visible and genuine pic.twitter.com/PZ3etGu3LM

Minister of Health of Djibouti arrives in #Mogadishu to support victims of the 14 October attack by terrorists pic.twitter.com/rFs10yU3GV

Aamin Ambulance is a free ambulance service made up of members of the public who have been working diligently to deliver aid to Somalis in the region. A GoFundMe page has been started to raise donations.

We offered 4 ambulance vehicles to transport most heavily wounded people to the Airport, whereby the Turkish Military Plane will take them. pic.twitter.com/9VDKs4JcAq

The U.S. Mission to Somalia spoke out on Twitter with a statement and asked volunteers to donate blood for bombing victims.

Politicians worldwide have taken to Twitter to both condemn the attacks and to offer their condolences.

The attacks in Somalia are horrifying & Canada condemns them strongly. We mourn with the Canadian Somali community today.

My heart aches for Somalia. Let’s keep all those impacted by the violence in Mogadishu in our thoughts and prayers

The Toronto sign will be lit in the colours of Somalia’s flag today in memory of the innocent victims of terrorism in Mogadishu. Our thoughts are with Somalia.

UK condemns #Somalia terror attack. My thoughts are w/ victims, their families & the people of Somalia at this difficult time @UKinSomalia

The #MogadishuTruckBomb attack – shocking in scale, desperately sad in terms of the individuals whose lives have been senselessly cut short https://t.co/Ut8KGitqBR

We lost Mohamoud Elmi, the Director General of Humanitarian Affairs @MoHADM_Somalia. He was one of the hardest working members of our team –