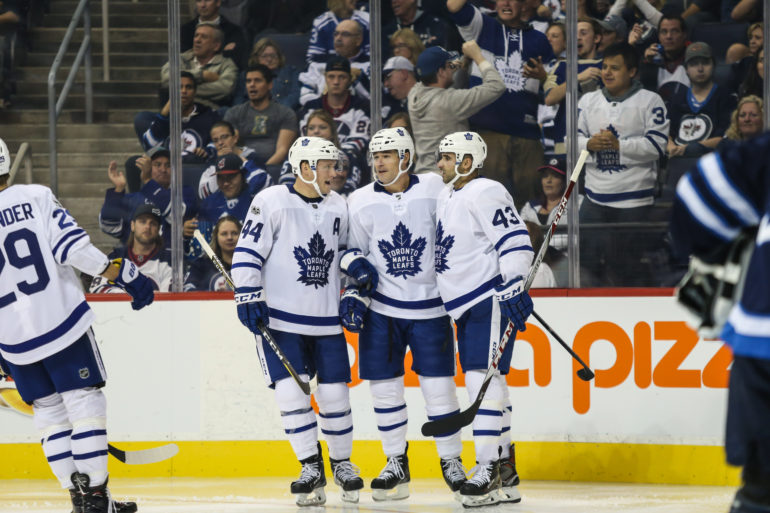 A big opening night win against the Winnipeg Jets showcased what many can expect out of the Toronto Maple Leafs this season.

In a 7-2 thrashing of their opponent in the first game of the season, Toronto has gotten the attention of the league not just by the score but by the team’s gameplay.

Frederik Andersen gave the Leafs a chance to win the game from the get go. He made several saves and didn’t give up a goal through 16 minutes of playing shorthanded. He was finally beaten with eight minutes left, when the score was 6-0 and the game was out of reach.

Chris Johnston, a senior Hockey Writer at Sportsnet, said Andersen, who is coming into his second season as an everyday NHL starter, will need to stay healthy and play well for the Leafs to stay competitive.

“If he was injured they don’t really have anyone that would be capable of rolling out on an everyday basis as your number one goalie,” he said. “If there is anything wrong with him either in play or health I think that would be a very bad situation for the Leafs.”

Johnston said the goaltender came into training camp looking lighter after working with a dietician, which helps with his range of motion as a goalie and ability to handle the workload.

Head Coach Mike Babcock has nothing but praise for his 28-year-old net minder.

“Freddie gives us confidence and worked real hard in the offseason to prepare and had a good camp,” he said.

"I just think any time your goalie plays good, he gives you a chance.” – Mike Babcock

“Sophomore slump” could be the one phrase Leafs fans don’t want to hear when it comes to their team during the 2017-2018 season.

Last year the kids in blue and white went from being a team who would compete in a few years to a team who could compete now. Johnston believes the Leafs can compete for the division title instead of the wild card spot.

“Last year in many ways was a bit of a charm season not very much went wrong. All the rookies played as well or better than what was expected of them,” said Johnston. “It’s reasonable to expect this team to make the playoffs again and maybe go on a bit of a run.”

After Auston Matthews, William Nylander and Mitch Marner enjoyed great rookie campaigns a year ago; it’s hard not to think of the term sophomore slump. Babcock admits it does exist, but is confident it won’t happen to his group of players.

“When you do your work in the offseason and you get prepared you don’t tend to have any sophomore jinx. It’s if you feel good about yourself and you don’t work and you come back and it doesn’t go as good,” said Babcock. “I’m not as concerned about that as some might be, the guys are good players, and worked hard this summer and so it’ll show this winter.”

With 3 goals in 2:38, it was a nice first for the @MapleLeafs. #NHLFaceOff

In comparison to last year’s team, not many changes were made. Johnston says the biggest difference is the depth they have throughout the organization.

“When you look at their final cuts, some of the players that are down with the Marlies had a real strong case to be with the Leafs; there just simply wasn’t roster spots,” he said. “That depth will help them if they do run into injury trouble, which they didn’t have last year.”

On Wednesday night, depth rose to the occasion. Many, if not all, of the Leafs’ big name forwards got a point but those who hadn’t scored a goal or registered a point were also impressive.

Nikita Zaitsev and newly acquired Ron Hainsey had over 22 minutes of ice time for the entire game. With the Leafs having 16 penalty minutes in the game, Zaitsev had just over 11 minutes on the penalty kill alone, while Hainsey finished with over 12.

Eric Fehr was someone who battled in training camp and was able to find a spot on the team’s opening night roster. He was an integral part of the penalty kill along with Connor Brown.

Patrick Marleau gets his 2nd of the season and 2nd as a Leaf. #TMLtalk https://t.co/5uzEZUCrOH

“This team has three lines virtually nobody else can match,” said Johnston. “It should be a pretty fun year for them.”

In the end many say the team has some of the best potential in the league. The future is bright for Toronto but being good on paper and on the ice are two separate things.

“You can talk about the potential but in the end you got to deliver,” said Babcock.