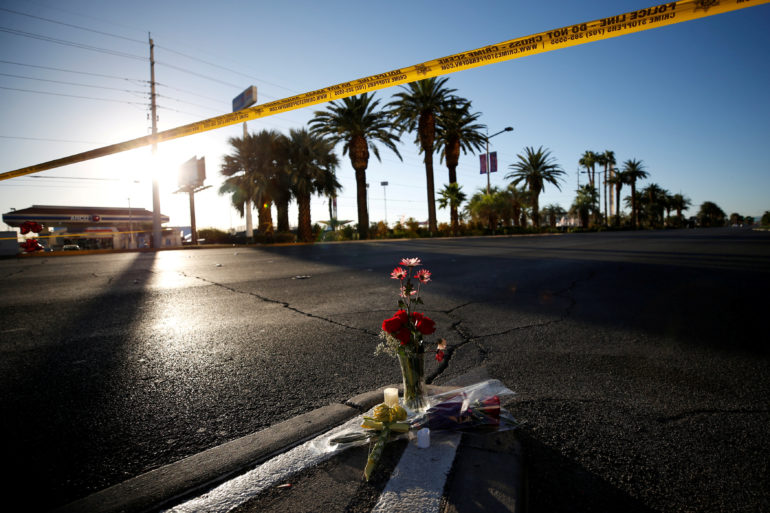 The police presence on the Las Vegas strip is stronger than usual, as authorities are cracking down on the investigation of the gunman who killed 59 people and injured 527.

“This investigation is going to be long and contracted before we get to the bottom of everything associated with it.” Said Las Vegas Metropolitan Police Department Sheriff Joe Lombardo while speaking to reporters at the LVMPD headquarters.

The death toll of 59 in Las Vegas makes it the deadliest mass shooting in modern American history pic.twitter.com/qwnY1bi5cS

Steve Paddock, 64, from Mesquite, Nevada has been identified as the gunman who opened fire at the Mandalay Bay hotel on a crowd of about 22,000 people.

Police still don’t have a motive for why Paddock inflicted a reign of terror on Vegas, and there are no known links between Paddock and any radical groups or organizations.

Paddock’s girlfriend Marilou Danley, has been named as a person of interest. Although it is still believed that Paddock acted alone, authorities aim to interview her after she returns from a trip to Tokyo.

“We are confident but not 100 per cent sure we have located the female person of interest.” Said Lombardo.

Police found 42 firearms, thousands of ammo rounds and explosives in Paddock’s several homes across Nevada, including 23 guns found in his Mandalay Bay hotel room, which he was able was able to smuggle up there without raising awareness from anyone at the hotel.

A police officer stands in front of the closed Las Vegas Strip next to the site of the Route 91 music festival mass shooting outside the Mandalay Bay Resort and Casino in Las Vegas, Nevada, U.S., October 3, 2017. REUTERS/Lucy Nicholson

“We’re bringing in all the resources of the FBI to assist us in this investigation in particular to their victim witness, advocates and their CSI folks to help us process the scene and ensure that we’re getting all the evidence that we can possibly obtain.” said Lombardo.

This raises the concern of gun control in the United States to another level; if it wasn’t high already, with guns being available for purchase at Walmart Superstores in Nevada.

In the wake of the deadliest shooting in U.S history, the Las Vegas community is looking to heal in the aftermath of this tragedy.

On Sunday, first responders and law enforcement rushed to the scene on the Vegas strip to tend to the wounded, and residents reacted remarkably, providing assistance with no hesitation.

Local civilians assisted responders, using their own vehicles to help transport over 500 injured victims to hospitals.

I am so proud of our great Country. God bless America!

The hospitals are being overwhelmed by swarms of the wounded.

Whether they arrived in the back of an ambulance or the back of a residents’ pickup truck, doctors worked (and continue to work) frantically as Las Vegas desperately attempts to bounce back from the disaster.

So far four Canadians have been identified among the 59 killed. Jessica Klymchuk of Valleyview, Alta., Jordan Mclldoon of Maple Ridge, B.C., Calla Medig of Jasper, Alta. and Tara Roe Smith of Okotoks, Alta. all lost their lives in Las Vegas.

This afternoon, I spoke with @POTUS Trump to offer condolences for last night’s horrific shooting in Las Vegas: https://t.co/VjOO8FwZQF

A candlelight vigil has been set up at the route 91 Harvest Country Music Festival on the Las Vegas strip in honor of the victims.

Now over 24 hours removed from the incident, the Las Vegas strip is attempting to readjust back to regular business.

The survivors are returning home, the injured are being treated and the dead are being mourned.