Humber Strike: What a long-term strike means for students 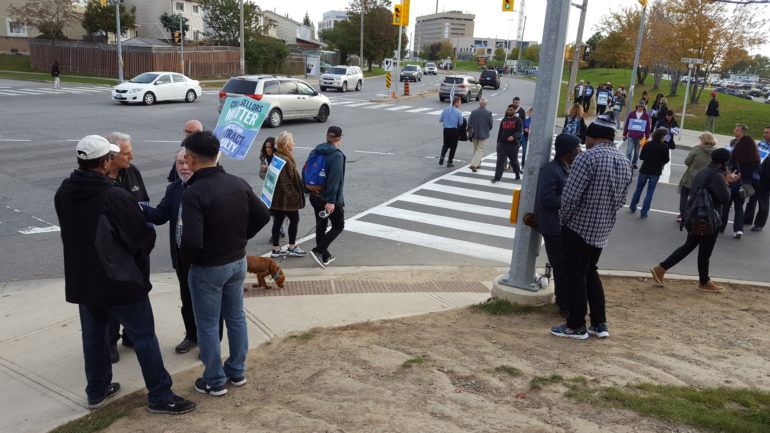 A mix of picketers and pedestrians stand along the street near the entrance of Humber College’s North campus. (Tyson Lautenschlager)

The continued college faculty strike in Ontario has a lot of people on edge, wondering just how long the work stoppage will truly last. There seems to be no end to the strike in sight, so what will happen to students if the strike is prolonged? That’s a question on a lot of people’s minds, but no clear answer has been given yet.

Humber College’s Dean of Students, Jen McMillen, confirmed in a video posted to Facebook yesterday that end-of-semester dates could be subject to change.

“Please keep in mind that the calendar dates and end-of-semester dates may change depending on the length of the strike,” she said. “I can confirm for you now that there will be no academic activity; so no tests, exams or assignments after 6 p.m. on December 22, or before 8 a.m. on January 2.”

Humber Strike: IGNITE president to meet with Minister of Education on Thursday

Thousands rally at Ministry of Education

Lorne Coe, Conservative MPP for Whitby-Oshawa and the party’s Critic for Post-Secondary Education, much like students and faculty, wants the strike to come to an end as soon as possible.

“The Ontario Progressive Conservative Caucus hopes that the strike will end before serious harm is done to the students’ semester,” Coe said. “I hope for the good of the students and faculty, both the Union and the Council representing College management get back to the negotiating table and wrap this up swiftly.”

“Students cannot afford to miss classes, and we have called on the Premier to step in and do everything she can to get both sides back to the bargaining table,” he said.

One of the big issues during this strike from a student perspective is tuition. Students across Ontario have paid thousands of dollars for a service they are not currently getting.

“We support the students in getting a [tuition] refund,” Shawn Pentecost, OPSEU bargaining team member said. “They’re paying the colleges for a service they’re not receiving. Students understand that we’re looking at issues that affect their lives on a daily basis in the classroom.”

New Democrat MPP for London West, Peggy Sattler, also recognizes that students are paying out of their own pockets, while not receiving education. The NDP education critic said it’s time for the province to get involved.

“I know that a lot of students are out of pocket already. It’s not just a question of tuition. They’re out of pocket in all kinds of ways,” she said. “I had landscape design students from Fanshawe College who had paid out of pocket for airline tickets to go for a semester abroad. These were non-refundable tickets. They purchased equipment for their semester abroad, and then the strike put a kibosh on everything. In that case, fortunately, the college stepped forward and made a commitment to reimburse those students, but that’s just one little example of the kinds of costs for students by the lack of resolve from the government in getting the parties back to the table.”

Premier Kathleen Wynne and Minister of Advanced Education, Skills and Development Deb Matthews have been pressured by key provincial governmental leaders, like PC opposition leader Patrick Brown, to step in and get both parties back to the table, but the College Employer Council said it isn’t as easy as one would think for the government to take action.

“The government doesn’t have any role in terms of the collective bargaining process,” said David Scott, a spokesperson for the Council said. “The government and the Minister have been very clear. It is [Matthews’] hope that the parties get back to the table, and frankly they should at some point in time.”

When asked whether imposing back-to-work legislation on college faculty would be an appropriate step to resolving the strike, Scott said it’s more important to work through the system.

“We think no matter what settlement there is at the end of the day, it has to be one that is fair to faculty and appropriate. Our view is that we should be, as a system, working through the collective bargaining settlement,” he said.

Sattler agrees that a back-to-work legislation wouldn’t be the right direction to go in.

“The problem with back-to-work legislation is that it patches over the fundamental problems in the system that led to the strike in the first place,” she said. “A negotiated settlement is what we need to be focused on because it will address some of the underlying issues that led to the breakdown of the negotiations during the collective bargaining process.”