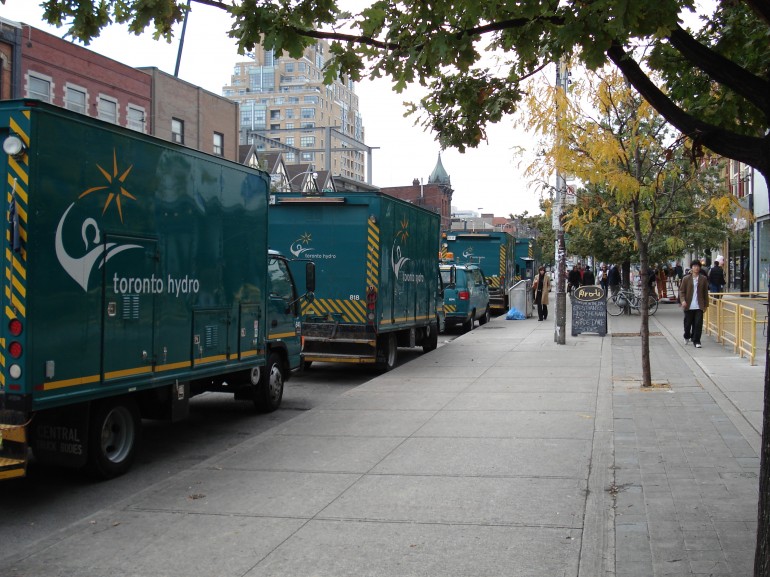 Toronto Hydro trucks parked on the side of the road. (Eja2k/ WIKI COMMONS)

Workers are restoring power to the remaining customers still without electricity after Sunday’s windstorm that at its peak left 25,000 people without power across Toronto.

Crews continue to work as quickly as possible to fix the problem. There are still around 200 outage-related calls that require investigation, according to Toronto Hydro’s Twitter.

While crews are making progress, there are still 200 outage related calls that they need to respond to and investigate. (1)

600 customers remain w/out power & crews continue to work as quickly as possible. Your patience & understanding is much appreciated. (2)

“At this point it’s quite difficult because of the 600 customers we do have out, we also have about 200 incidents that called in.”

Restoration efforts have been going on all night and will continue throughout the day.

“What we have been doing is sending in our day crews and we’re re-assigning the capital program crews who would normally be doing planned work,” Buchan said. “They will now mostly be doing damage assessment and restoration of power for the smaller outages.”

“We expect the power to be back by end of day today for the 600 customers which will be restoring power along the way as we can. Our global time of restoration is by the end of day,” he said.

Environment Canada warned of strong gusty winds of up to 90 km/h on Sunday in the GTA. Preliminary data recorded at Toronto International Airport showed that maximum wind gusts reached 102 km/h and 91 km/h at Toronto City Airport.