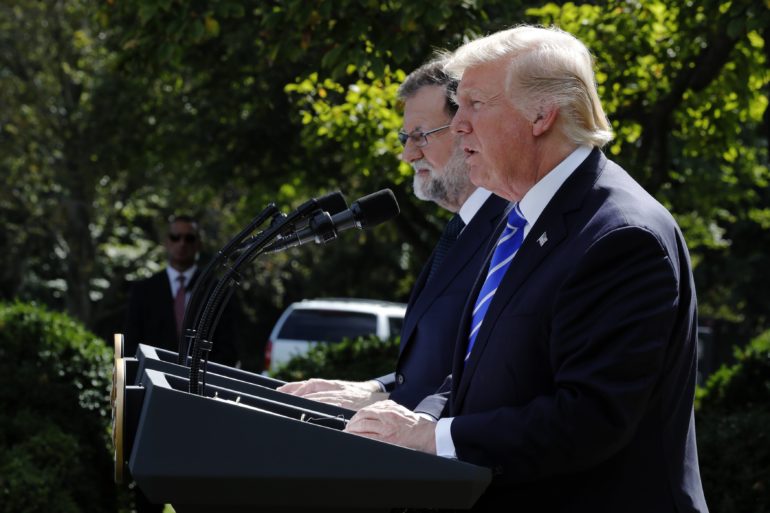 U.S. President Donald Trump met with Spanish Prime Minister Mariano Rajoy at the White House for a press conference today in which the two leaders bolstered their commitments to defending international democracy.

The two leaders spoke highly of progress made in adopting economic sanctions against North Korea and commended nations such as China for their commitments while calling on the rest of the UN to follow suit and take a hard-lined approach to sanctions.

“We have to be forceful freedom democracy and human rights,” Prime Minister Rajoy said.

“Spain will support any political decision which will contribute to putting an end to this situation which has nothing to do with the principals western democracies defends.”

The Trump administration and the rest of the UN are dealing with escalating tensions with Kim Jong-Un’s regime in North Korea. Most recently North Korean officials claimed the Unites States has declared war and threatened response by shooting American planes out of international airspace.

“We are totally prepared for the second option, not the preferred option. If we take that option it will be devastating for North Korea. That’s called the military option,” Trump said.

“He is acting very badly, he’s saying things should never be said and we are applying to those things, they are a reply, not an original statement,” Trump added in regards to claims of declaring war.

Trump then stated the North Korea situation could have been handled decades ago by previous administrations “which left me a mess and I’ll fix the mess.”

But North Korea is not the only regime which Trump and Rajoy would like to see economically sanctioned. In the past few years Venezuela has seen mass protests and instability due to violence, inflation and a shortage of basic good while their elected leader Nicolás Maduro is accused of taking authoritarian actions against his people.

“We’re spearheading in the EU to propose sanctions against Venezuela,” Rajoy said. He continued by stating they are no longer a democratic country and Maduro has started taking political prisoners, jailing them only because they think differently than Maduro.

“Venezuela is on the road to dictatorship unless that can be stopped,” Rajoy said. He went on to express his concern for Spaniards in Venezuela highlight the important of sanctions and an international coalition putting pressure on Maduro.

While tackling issues of international democracy together as a unified front, President Trump reiterated today his disdain for the “disgraceful” acts taken by NFL players as they protested during the national anthem and his focused commitment to providing aid for Puerto Rico and the Virgin Islands.
Trump will be visiting Puerto Rico next Tuesday amidst aid efforts from FEMA and the federal government after the island was devastated by hurricanes Irma and Maria.