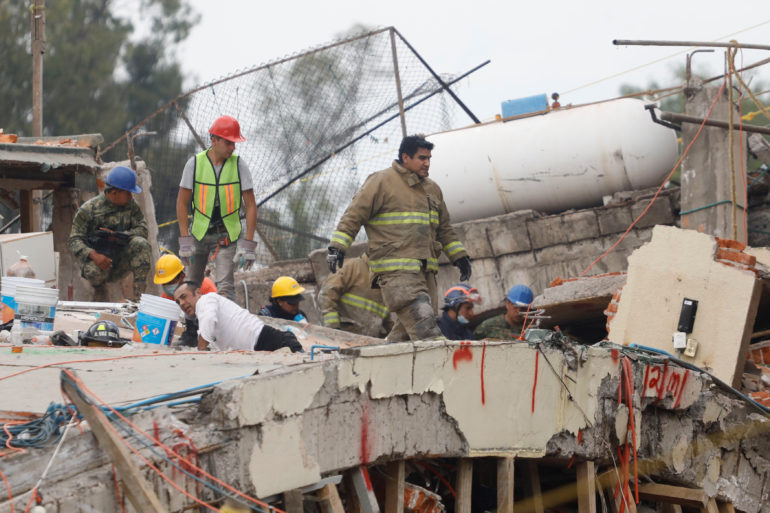 Rescue workers search through the rubble for students at Enrique Rebsamen school after an earthquake in Mexico City, Mexico, September 20, 2017. REUTERS/Edgard Garrido

Thousands of people in Mexico City are now homeless after Tuesday’s deadly earthquake that killed more than 200 people.

The tremor turned buildings to rubble and left the ones still standing on the brink of collapse. For locals, the whole ordeal has left them frightened for their safety as well as their communities.

“Things are really bad for us. It has been such a scare and many buildings are affected and many people need help,” Stephania Ocampo, a resident of Mexico City told Humber News via Instagram.

Many people in the Mexico City area remain missing as rescuers continue to search frantically through the rubble. Most notable today were the efforts to free three young girls from a school that collapsed.

One 12-year-old girl remains trapped but it’s reported she has been able to communicate with emergency workers.

Mexico’s Education Minister Aurelio Nuno said the bodies of 21 children and four adults have been discovered in the school.

“Canadians share the deep sorrow of the people of Mexico who have been severely tested by natural disasters in the past few weeks. We have faith in their strength and resilience. The Government of Canada is ready to assist Mexico as needed and appropriate.”

Freeland also said there are no reports of Canadian casualties to date.

Nelson Dominguez of Marlin Travel in Toronto says that despite the earthquake, Canadian tourism to Mexico should not be affected.

“It is a tragedy – however Canadians tend to travel to places such as Cancun and the Riviera Maya, and the earthquake hit Mexico City, which is a tourist destination but not generally for Canadians,” he said.

This is the second major earthquake to hit Mexico this month. Earlier this month, at least 61 people were killed when an 8.1 magnitude affected the country.