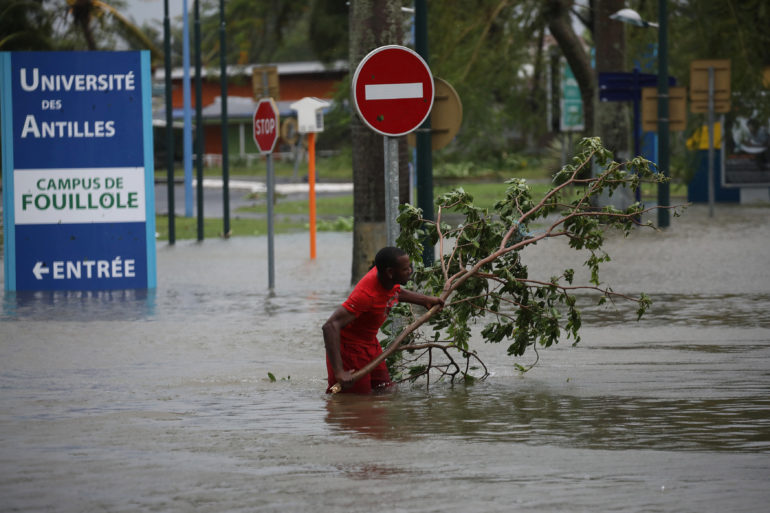 A flooded street after the passage of Hurricane Maria in Pointe-a-Pitre, Guadeloupe island, France.

Hurricane Maria has caused devastation for thousands on the Caribbean islands of Dominica and the U.S. Virgin Islands and is headed to Puerto Rico.

The category five hurricane caused some residents in Puerto Rico to evacuate their homes due to heavy rainfall and strong winds approaching 260 km/h.

Yvette Fereuad, one of the many Canadians who have family in Puerto Rico said she’s eagerly waiting to speak to her aunt again.

“Last night I was able to hear from my aunt Zulima but she was in absolute panic over the hurricane,” Fereuad said. “We were only able to speak for a couple of minutes, but she was ready to evacuate her home. I tried reaching her again this morning but haven’t had any luck.”

The U.S. National Hurricane Center warned that the hurricane will raise water levels by seven to 11 feet above normal tide levels.

Puerto Rico Governor Ricardo Rosselló immediately declared a state of emergency which was followed by an emergency declaration by U.S. President Donald Trump to help with federal assistance.

Dominica Prime Minster Roosevelt Skerrit took to Facebook to post the first official word on what was happening just outside his window.

His series of posts concluded with his concerns about his roof being gone and his house beginning to flood.

Hurricane Maria comes just four weeks after Hurricane Harvey killed more than 80 Texans as well as Hurricane Irma, one of the strongest storms to ever hit the U.S., which killed 26 people and forced around 6.3 million people to evacuate in Florida.

Geoff Coulson, Warning Preparations Meteorologist for Environment Canada said its not rare for all these hurricanes to hit back to back.

“This is the heart of hurricane season and when you look back over the decades the first couple of weeks in September tend to be the busiest time for hurricane activity,” Coulson said. “Hurricane Jose is still out there and spinning around off the eastern seaboard of the U.S. and Maria is following close behind, something we don’t see often but it does happen from time to time.

The National Hurricane Centre has advised Maria is heading towards the Dominican Republic.

Although there’s already been several hurricanes in the past month, Coulson said this isn’t the end.

“Hurricane season does normally continue well into the month of November so this has been a very active stretch of weather,” Coulson said.  “But this season by no means is over and we could see even more Hurricane activity in the Caribbean, the Atlantic and the Gulf of Mexico during the course of the coming weeks.”

Any Canadians planning to travel to areas affected by hurricane Maria are being advised to check with their travel agencies and to stay on top of overall travel plans.