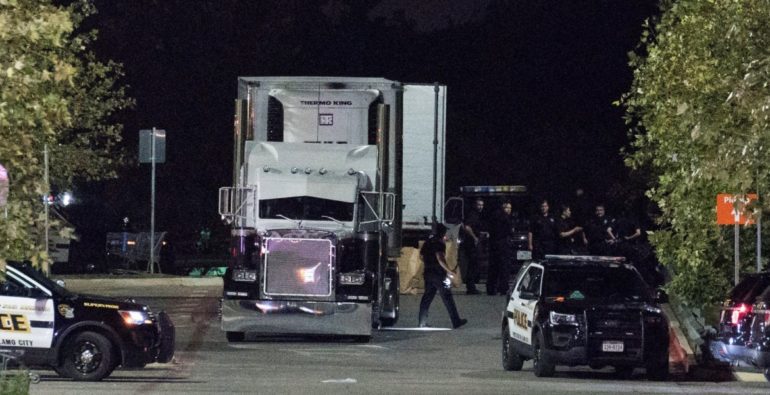 San Antonio police officers investigate the scene where eight people were found dead in a tractor-trailer loaded with at least 30 others outside a Walmart store. (CREDIT: ERIC GAY)

Ten people are dead and approximately 30 others are in very serious condition after being found inside a brutally hot semitrailer parked in a Wal-Mart parking lot in San Antonio, Texas.

In what authorities are calling a “horrific scene,” over 100 people were originally crammed into the trailer. Some managed to flee the scene before policed arrived only to be whisked away by six black sport utility vehicles waiting for them nearby.

Authorities became aware of the truck overnight after a Wal-Mart employee notified police of a strange interaction with the driver.

Two of the survivors, according to the criminal complaint, recounted having been smuggled in small groups of immigrants across the Rio Grande River from Mexico to Texas, where they were harboured in “stash houses” around the border town of Laredo before being rounded up into the tractor-trailer for the trip to San Antonio, about 150 miles (240 km) to the north.

“President Trump has made it clear that he will not tolerate illegal immigration, but this situation just shows the extremes that people will go to,” said Richard Hartley, the Department Chair of the Criminal Justice program at the University of San Antonio.

Aside from the ten dead bodies, there were also 20 other people who were in extremely critical condition, San Antonio Fire Chief Charles Hood told USA Today this morning. Others were suffering with lesser injuries, such as heatstroke and dehydration.

“They were very hot to the touch,” said Hood. “With no air conditioning and the temperature at brutal heights, this is nothing short of a tragedy.”

Of the 38 people found inside the truck, Hood said at least two of them were children.

“All were victims of ruthless human smugglers indifferent to the well-being of their fragile cargo,” he said. “The South Texas heat is punishing this time of year. These people were helpless in the hands of their transporters. Imagine their suffering, trapped in a stifling trailer in 100-plus degree heat.”

The Department of Homeland Security defines human trafficking as a “modern-day form of slavery involving the illegal trade of people for exploitation or commercial gain.”

Emily Gilbert, a professor at the University of Toronto with expertise in border security and immigration, believes that fighting human trafficking is not just about enforcing human rights, but also about strengthening and using criminal justice systems to prosecute traffickers.

“Human trafficking is nothing new,” Gilbert told Humber News. “But definitely under a Trump administration, it’s making people more fearful when trying to get over the border and perhaps putting their lives at risk. We see this happening in the UK, Mexico, even the Mediterranean Sea right now with people fleeing. This tragedy is a horrific example of the desperate measures that people go to.”

The officials said more details about the victims, including gender and age, will be released at a future briefing.