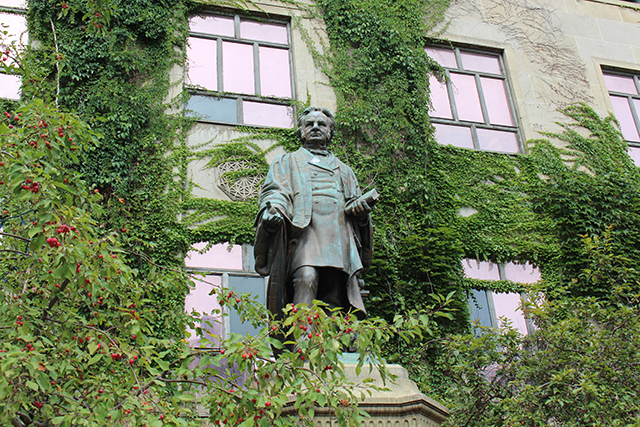 Egerton Ryerson laid the foundation for Ontario’s education system, but for some he’s a figure of oppression and feel a Toronto university shouldn’t be named after him.

The demands include the removal of the Egerton Ryerson statue from Gould Street and changing the university’s name to one “that does not celebrate a man who supported and created the structures of genocide.”

The Ryerson Student Union (RSU) is an autonomous student-run organization that operates independently from the school.

The list of 11 demands was posted to Facebook alongside a logo for a campaign called “Colonialism 15o” and the accompanying hashtag #Resist150.

Other demands the RSU made include hosting at least one annual pow wow on campus and including mandatory Indigenous content in all programs.

“This whole campaign was headed by our VP of Equity Camryn Harlick, who is an Indigenous identified person,” incumbent RSU President Susanne Nyaga said, explaining how the campaign started. “Camryn got together with other Indigenous students and tried to talk about Canada 150 and how it’s problematic, how only acknowledging the past 150 years of Canada literally erases the thousands of years that indigenous folk have been here.

“Indigenous students have been calling for changes on campus for a while and having our first indigenous executive kind of gave us a platform for them to organize, create a list of demands, and go forward with it,” Nyaga said.

“We do have a five-year plan on how to proceed, in terms of talking about a timeline, ideally changes happen tomorrow,” she said. “We understand realistically that it’s probably not going to happen tomorrow, but conversations need to be happening very soon.”

In an official statement, a university spokesperson told Metro News Toronto the RSU is meeting on July 19 to clarify its campaign and be notified of the RSU’s concerns through official channels to “work together productively.”

The university is named from Egerton Ryerson, played an influential role in framing education programs in 19th century Canada while superintendent of education for Canada West, but he also devised the concept of residential schools.

“These beliefs in part influenced the establishment of what became the Indian Residential School systems that has had such a devastating impact on First Nations, Metis and Inuit people across Canada,” the website states.

History student Evan Purrit, 23, said he believes Ryerson was influential with the schooling system in Ontario.

He said he didn’t know about Ryerson’s involvement in the development of residential schools.

“To be honest we didn’t really go into his history in my classes but I’ve heard he’s a focus in the courses on the history of Toronto,” Purrit said.

The RSU encourages Ryerson students and members of the wider community to attend their board meeting on July 19, where further information on their list of demands, and plans moving forward will be discussed.