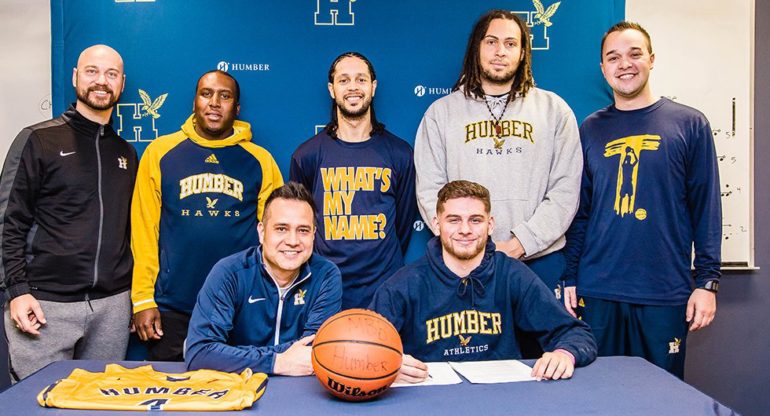 James DePoe is humble about his role but he doesn’t shy away from talking about his love for winning.

“Its overwheming, it’s incredible, not real, almost,” he said after returning home to Toronto with a gold medal after the U19 Canada basketball team he manages beat Italy in the World Cup final in Egypt.

Many Humber students recognize DePoe for his role as varsity coordinator and men’s basketball assistant coach, but what some may not know is, he’s been working another job all along.

For more than seven years he has served as team manager for various international Canadian basketball teams.

DePoe managed the Canadian U19 World Cup Basketball team to a gold medal in Cairo this July.

“As I unpack and try to get organized I have little moments, the emotions come out, there’s a lot of pride – it’s an unbelievable feeling,” DePoe said.

He describes himself as the glue of the team, making sure everything’s running smoothly as far as scheduling and logistics.

“I take a lot of pride in the fact that I can stand there lined up and hear the Canadian national anthem, with the maple leaf on my chest representing our country because it’s a great country. That’s really the best part: the pride and passion,” he said.

The truly remarkable part of it all is that DePoe brings the same passion and drive to both jobs simultaneously.

“It’s not just a basketball thing for me,” he said. “When I travel, I like to learn how other federations are doing certain things, how different events are being designed and run.

“So I’ve taken a lot of things over the years back to Humber and tried to incorporate it into our varsity program.” DePoe said. “From certain logistical things, to analytics, to key performance indicators in our department. Humber’s varsity program is the best in the country at the college level. So I try to transfer that excellence from both jobs back and forth, to try and be the best every year on both sides.”

With DePoe holding all of the pieces together, both Team Canada and the Humber Hawks basketball have experienced recent success. With the win in Cairo, Canada ended a medal drought of more than 60 years. The Hawks have finished on the podium for the last four years in OCAA (Ontario Collegiate Athletics Association) competition.

“The continuing support from Humber has been incredible, allowing me to take my vacation days for this and allowing me to improve myself professionally,” DePoe said.

He is quick to redirect any praise on to others, and even more willing to commend the actions of those around him.

DePoe said it’s the people that he gets to work with that drive him, like 17 year-old Team Canada star RJ Barrett.

“The best part about RJ is, you see the numbers and efficiency and spectacular dunks and plays, but it’s really just who he his,” he said. “It’s testament to his dad Rowan, and the family and how they raised him – he’s a wonderful young man, very respectful, very humble, hard working, cares about his teammates, cares about playing the right way.

“He’s got a world of potential,” DePoe said. “When he’s old enough I’m sure he’ll have all the top schools knocking at his door.

“He’ll definitely be a high pick if not the first overall in the NBA draft,” he said.

Depoe’s work and attitude are reflective of Canada Basketball’s official statement of values.

Purpose – We are principled, focused and strategic in pursuing our vision.
Excellence –  We are innovative, performance-driven and results oriented.
Team –  We believe in the power of “team” on the court, in our communities and across the country.
Nation –  We take pride in representing Canada to the world.

Depoe keeps the team focused, strives to improve and innovate at his job, making the position an integral component of the team, so who better to be the mortar between the bricks of the house that is Canada Basketball.

“Canada is right where we should be, we’re on the right path, but we need to continue to improve as we move upwards into the top ranks,” Depoe said.