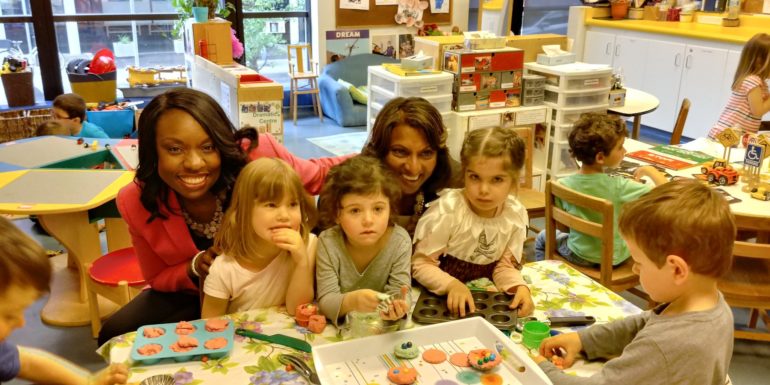 Ontario could become the second Canadian province to adopt a universal child care system after an announcement today.

“Today, we’re launching Ontario’s renewed early years and childcare policy framework and expansion plan,” Naidoo-Harris said. “This will be a blueprint around which we build a foundation for quality, affordable and accessible child care in our province.”

The expansion plan covers a five-year span in which Naidoo-Harris says it will include seven specific action items while committing $1.6 billion in capital funding.

“Our vision for the continuum of learning is designed to help students up to the age of 12 grow into confident and caring citizens while giving families the convenience and benefits of a well integrated systems,” Hunter said during the press conference.

A study published in October by economists Gordon Cleveland and Michael Krashinsky, both professors at the University of Toronto, determined that approximately three quarters of Toronto families cannot afford yearly child care costs.

Such findings have suggested context for a proliferation of unlicensed daycare facilities in which several child deaths have been reported in the Toronto area alone in recent years.

Martha Friendly, Executive Director of the Childcare Resource and Research Unit, believes the new system is a step in the right direction for national child care.

“For the first time in many years, it feels like positive changes in child care can happen across Canada,” Friendly told the Toronto Star today.

“With the affordability and workforce strategies as centerpieces and other key elements such as inclusion and expansion in the not-for-profit sector front and centre, I’m very excited about working with the child-care community, researchers and the provincial government on all this,” Friendly said.

Sally Kotsopoulos, the Acting Director of Childcare Development Centre at Humber College’s North campus, agrees that the universal child-care movement is a positive step forward, but calls for close attention to the finer details of the system.

“There will be a huge flux of families who are going to need care and there may not be child care available immediately,” said Kotsopoulos. “So it needs to be very thoughtfully planned, and I’m sure the government will be looking at that, the infrastructure making sure there are programs available.

“Because we are now under the ministry of education for child-care, we have to think from zero up and how we are accommodating and building structures that accommodate and meet the needs of very young children consistently where they don’t feel like they are in borrowed space,” she said.