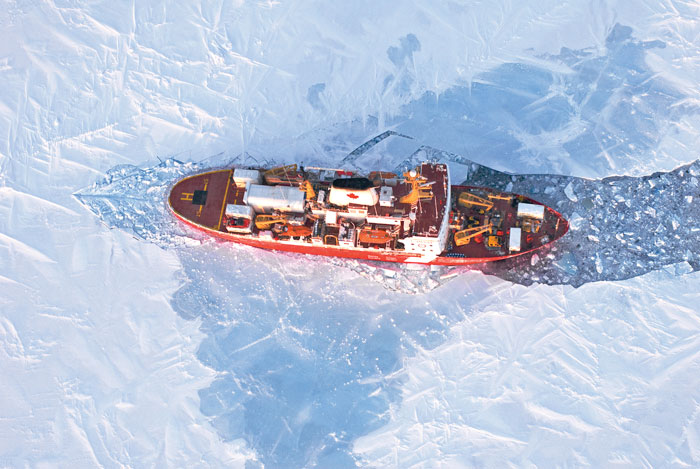 The CCGS Amundsen has been a major catalyst in revitalizing Canadian Arctic science by giving Canadian researchers and their international collaborators unprecedented access to the Arctic Ocean. (CNW Group/ArcticNet)

The CCGS Amundsen, an icebreaker and Arctic research vessel, was rerouted to help communities besieged by countless masses of ice — sometimes eight metres thick — off the northern coast of the island of Newfoundland. The climate research project led by the University of Manitoba and Manitoba Hydro was cancelled due to the delay created by the diversion to assist landlocked communities in need.

The ship departed Québec City in late May for the short-lived first leg of a four-year, $17 million expedition with the purpose of studying climate change in Hudson Bay. The hazardous conditions in the area forced the ship and its crew of 40 scientists involving six Canadian universities to clear paths for supply tankers and to answer distress calls made by small fishing vessels.

David Phillips, Senior Climatologist at Environment and Climate Change Canada, said the situation is a mixture of “a bit of climate change, but mostly weather.”

There is a distinction between climate and weather, he said.

“Climate is more the statistics of weather — we can’t really see it,” Phillips said. “Weather is what you see by looking out the window. Climate is like all the weather averaged, but obviously more complicated.”

The scene on the north coast of Newfoundland is the result of multiple weather phenomena taking place at the same time. Ice masses travel from the Arctic drift along the Labrador Current before being redirected by prevailing winds.

“Prevailing winds normally go from west to east, and bring warmer, dryer and sunnier weather this time of year,” Phillips said. “But northeasterly winds in the north Atlantic have forced ice toward the shore.”

Ice flows south from the Arctic on the Labrador Current, then is pressed against the landmass by the northeasterly winds.

Phillips said northeasterly winds are blowing cooler air masses from the Atlantic and making these effects more pronounced, by making it more difficult for ice to melt.

“These northeasterly winds, with colder temperatures and repetition, are making records of cold temperature and keeping the water too cool to melt ice,” he said.

This opposite and sustained “reverse effect” is also part of the reason southern Ontario, Québec and the Maritimes have seen high levels of rainfall during the past two months.

Climate change has a smaller role in creating this phenomenon.

“We may see it more often because we know fallout from climate change is increased variability,” Phillips said. “The impact will be greater, due to more shifting ice. Sea ice is also more likely to show up earlier.”

Newfoundland and Labrador is a popular tourist destination for observing ice formations as they drift southward.

“Its a great season for viewing icebergs and ice floes, but its causing all kind of misery in shipping and navigation,” Phillips said.

The expedition has yet to be rescheduled.