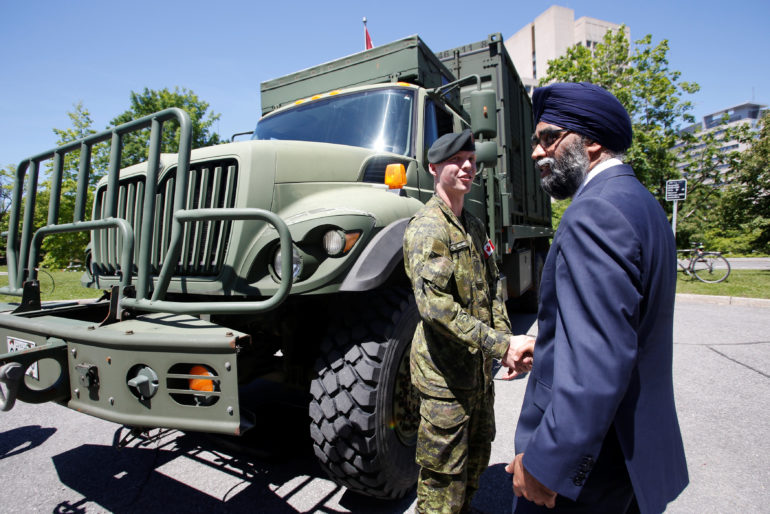 The Liberal government is rolling out a plan to increase military spending by 70 per cent over the next 10 years.

The report, titled Strong, Secure, Engaged, reverses a “pattern of decline” and meets the obligations set out by NATO, Defence Minister Harjit Sajjan said. The budget promises over $62 billion and will see annual spending rise to over $32 billion by 2026. Details of the policy include better health care for soldiers and veterans, 88 new fighter jets and a full complement of naval ships.

Sajjan made the announcement a day after Foreign Minister Chrystia Freeland stood in Parliament calling for the country’s diplomacy and development strategies to be backed up by “hard power.”

Freeland made it clear in her speech that Canada would have step up to the plate in response to U.S. President Donald Trump’s increasingly isolationist policies.

“The fact that our friend and ally has come to question the very worth of its mantle of global leadership, puts into sharper focus the need for the rest of us to set our own clear and sovereign course,” she said.

“I am glad she stood up to Trump, although very politely,” she said. “He’s a bully, and if we don’t stand up to bullies they’ll take advantage of us.”

Simpson warns that in the near future critics will start focusing on Canada profiting from the multi-billion dollar arms deal the U.S. struck with Saudi Arabia. A factory in London, Ont. is making weaponized military vehicles for the Saudis, in a deal worth $15 billion.  This is an easy target for anyone looking to accuse this government of hypocrisy Simpson said.

The overall feeling that runs through Freeland’s speech, especially depending on the U.S. as a “security umbrella” not being in Canada’s interest, echoes a growing sentiment by other world leaders.

German Chancellor Angela Merkel made similar remarks at a beer tent last week, saying “The times when we could completely rely on others are, to an extent, over…we Europeans must really take our fate into our own hands.”

In London, one of the U.K. cities still reeling from a terror attack that left eight people dead, Mayor Sadiq Khan told the press that he won’t be “rolling out the red carpet” for Trump after the President tweeted scathing criticism for Khan’s handling of the attack aftermath.

“His policies go against everything we stand for,” Sadiq said.

This new policy of increased defence spending comes at the ideal time for a terror-stricken world. It could help quell the fear that comes from the almost daily terrorist attacks the U.K. and other parts of the world are experiencing.

The new document and Freeland’s speech are on the same page by using the phrase “hard power” when discussing the fight against violent extremism.